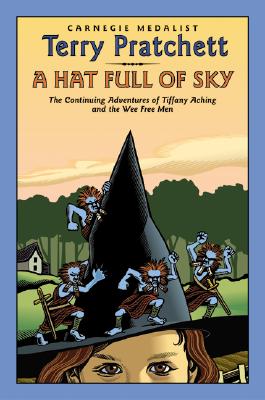 This is book number 2 in the Tiffany Aching series.

The second in a series of Discworld novels starring the young witch Tiffany Aching.

Something is coming after Tiffany. . . .

Tiffany Aching is ready to begin her apprenticeship in magic. She expects spells and magic—not chores and ill-tempered nanny goats! Surely there must be more to witchcraft than this!

What Tiffany doesn't know is that an insidious, disembodied creature is pursuing her. This time, neither Mistress Weatherwax (the greatest witch in the world) nor the fierce, six-inch-high Wee Free Men can protect her. In the end, it will take all of Tiffany's inner strength to save herself . . . if it can be done at all.

“By turns hilarious and achingly beautiful, this be just right.”
— Kirkus Reviews

“Readers will curl up to read with a sigh of contentment.”
— Bulletin of the Center for Children’s Books