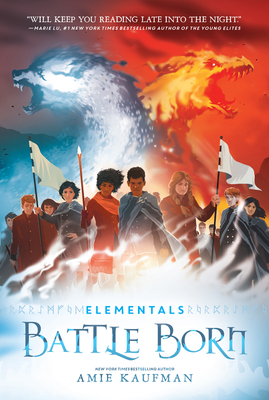 Tensions are at an all-time high in the final book of this rip-roaring adventure series about siblings with magical shapeshifter powers, from New York Times bestselling author Amie Kaufman.

Though Anders and his friends have delayed a war between ice wolves and scorch dragons, their mission is far from over. With adults on both sides looking for them, they’ve sought refuge in Cloudhaven, a forbidden stronghold that could hold the key to saving their home.

Meanwhile, Holbard has been ravaged, and its citizens are reeling. Many have been forced into bleak camps outside the city, and food is running short.

To rebuild Vallen and unite scorch dragons, ice wolves, and humans, Anders and Rayna must put everything on the line…before the damage done is beyond repair. But the price of peace may hit closer to home than they could’ve ever imagined.

Amie Kaufman is a New York Times and internationally bestselling author of young adult and middle grade fiction, and the host of the podcast Amie Kaufman on Writing. Her multi-award winning work is slated for publication in over 30 countries, and has been described as “a game-changer” (Shelf Awareness), “stylistically mesmerising” (Publishers Weekly) and “out-of-this-world awesome” (Kirkus). Her series include The Illuminae Files, The Aurora Cycle, The Other Side of the Sky duology, the Starbound trilogy, the Unearthed duology, the Elementals trilogy, and The World Between Blinks. Her work is in development for film and TV, and has taken home multiple Aurealis Awards, an ABIA, a Gold Inky, made multiple best-of lists and been shortlisted for the Prime Minister’s Literary Awards. Raised in Australia and occasionally Ireland, Amie has degrees in history, literature, law and conflict resolution, and is currently undertaking a PhD in Creative Writing. She lives in Melbourne with her husband, daughter, and rescue dog, and an extremely large personal library. Learn more about her and subscribe to her newsletter at www.amiekaufman.com

END_OF_DOCUMENT_TOKEN_TO_BE_REPLACED

This feature require that you enable JavaScript in your browser.
END_OF_DOCUMENT_TOKEN_TO_BE_REPLACED

This feature require that you enable JavaScript in your browser.
END_OF_DOCUMENT_TOKEN_TO_BE_REPLACED

This feature require that you enable JavaScript in your browser.
END_OF_DOCUMENT_TOKEN_TO_BE_REPLACED