If I Never Met You: A Novel (Paperback) 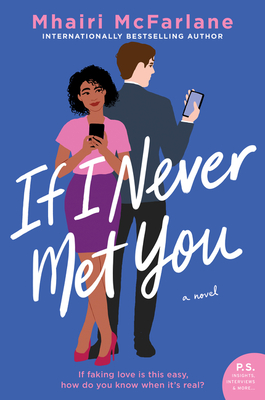 If I Never Met You: A Novel (Paperback)

One of Shondaland's 5 Must-Read Books for March and a Best Romance of 2020 by Amazon, OprahMag, Insider, Buzzfeed, Bustle, Cosmo, PopSugar, and BookPage.

If faking love is this easy... how do you know when it’s real?

When her partner of over a decade suddenly ends things, Laurie is left reeling—not only because they work at the same law firm and she has to see him every day. Her once perfect life is in shambles and the thought of dating again in the age of Tinder is nothing short of horrifying. When news of her ex’s pregnant girlfriend hits the office grapevine, taking the humiliation lying down is not an option. Then a chance encounter in a broken-down elevator with the office playboy opens up a new possibility.

Jamie Carter doesn’t believe in love, but he needs a respectable, steady girlfriend to impress their bosses. Laurie wants a hot new man to give the rumor mill something else to talk about. It’s the perfect proposition: a fauxmance played out on social media, with strategically staged photographs and a specific end date in mind. With the plan hatched, Laurie and Jamie begin to flaunt their new couple status, to the astonishment—and jealousy—of their friends and colleagues. But there’s a fine line between pretending to be in love and actually falling for your charming, handsome fake boyfriend...

Sunday Times bestselling author Mhairi McFarlane was born in Scotland in 1976 and her unnecessarily confusing name is pronounced Vah-Ree. After some efforts at journalism, she started writing fiction and her first book, You Had Me At Hello, was an instant success. She's since sold nearly 2 million copies of her books. Mad About You is her eighth novel and she lives in Nottingham with a man and a cat.

"McFarlane has a charming voice, one distinctly British in its wry humor, whimsical turn of phrase, and vibrant sense of setting... the novel itself is a dizzy delight, bursting with rom-com tropes... If I Never Met You is quippy and warm, an escape in almost every sense of the word, and McFarlane’s irresistible voice that balances pathos and humor in equal measure, leaves us wanting more.” — Entertainment Weekly

“Mhairi McFarlane’s voice is as clear as a bell—she makes you laugh, but she also makes you feel. I adore her!” — Sally Thorne, USA Today bestselling author of The Hating Game and 99 Percent Mine

"Readers who swarm to contemporary romance authors like Christina Lauren and Tessa Bailey... will enjoy this title."  — Booklist

"The best romance novel protagonists make you feel empowered and better about yourself and the world than you did before you started reading. If I Never Met You's Laurie is that kind of protagonist." — Cosmopolitan (Best Romance Novels of 2020)