The Life Of The Mind (Paperback) 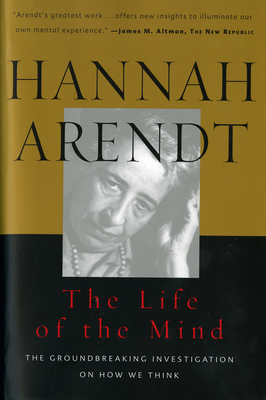 The Life Of The Mind (Paperback)

The most intriguing…and thought-provoking book that Hannah Arendt wrote (The New York Times Book Review), The Life of the Mind is the final work by the political theorist, philosopher, and feminist thinker.This fascinating book investigates thought itself as it exists in contemplative life. In a shift from Arendt's previous writings, most of which focus on the world outside the mind, this is an exploration of the mind's activities she considered to be the most fundamental. The result is a rich, challenging analysis of human mental activity in terms of thinking, willing, and judging.

Hannah Arendt (1906–1975) is considered one of the most important and influential thinkers of the twentieth century. She is the author of numerous articles and books, including The Origins of Totalitarianism and the essay collection Men in Dark Times.

MARY MCCARTHY (1912–1989) was an award-winning short-story writer, bestselling novelist, essayist, and critic. She was the author of The Stones of Florence and Birds of America, among other books.