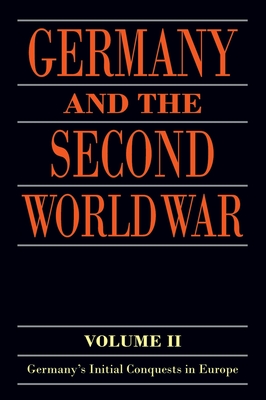 This is the second in the comprehensive ten-volume Germany and the Second World War. The volumes so far published have achieved international acclaim as a major contribution to historical study. Under the auspices of the Militargeschichtliches Forschungsamt (Research Institute for Military
History), a team of renowned historians has combined a full synthesis of existing material with the latest research to produce what will be the definitive history of the Second World War. Germany's Initial Conquests in Europe surveys the first year of the war deliberately begun by Nazi Germany. The authors examine the train of interconnected political and military events, and set military operations against the background of Hitler's war policy and general aims, both immediate and
long term. Their comprehensive analysis, based on detailed scholarly research, is underpinned by a full apparatus of maps, diagrams, and tables. The conflict took a course quite different from that which Hitler had intended, but nevertheless resulted in a series of conquests for the Third Reich. At
the same time, the establishment of hegemony on the European continent confronted the aggressor with new problems. Intensively researched and documented, Germany and the Second World War is an undertaking of unparalleled scope and authority. It will prove indispensable to all historians of the twentieth century.