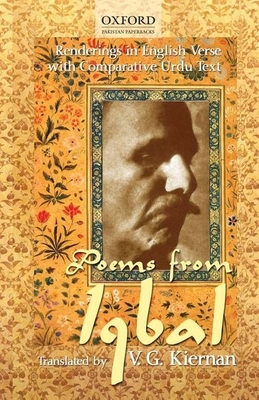 Allama Muhammad Iqbal was acknowledged during his lifetime as the most important poet of Muslim India in the twentieth century, both for the quality of his verse and for the influence exercised by his ideas. This volume contains a rendering in English of over a hundred poems chosen from the four collections of Iqbal's poetry written in Urdu, which include religious, lyrical, satirical and other themes. The English versions are accompanied by the original text.

V G Kiernan was born in 1913, near Manchester, studied classical languages and History at the Manchester Grammar School. In 1913 he entered the department of History at Cambridge. He passed both parts of the Tripos exam with first class and distinction, and was awarded a three year research grant. He wrote a thesis on British relations with China in the late 19th century, and was given a Fellowship of Trinity College. He spent some years in India (before the partition), teaching the Aitchison College in Lahore and doing publicity work connected with the War. After two more years at the Cambridge, he joined Edinburgh University as a lecturer in History. Retired in 1977, as Professor Emeritus, he has since lived at the township of Stow in the Scottish border hills. He has continued to write books and articles and was awarded an Iqbal medal from the Pakistani government.