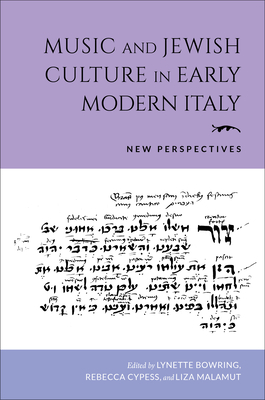 An interdisciplinary reassessment, Music and Jewish Culture in Early Modern Italy evaluates the social, cultural, political, economic, and religious circumstances that shaped this community, especially in light of the need to recognize individual experiences within minority populations. Contributors draw from rich materials, topics, and approaches as they explore the inherently diverse understandings of music in daily life, the many ways that Jewish communities conceived of music, and the reception of and responses to Jewish musical culture.

Highlighting the multifaceted experience of music within Jewish communities, Music and Jewish Culture in Early Modern Italy sheds new light on the place of music in complex, previously misunderstood environments.

Lynette Bowring is Assistant Professor Adjunct of Music History at the Yale School of Music. She received her PhD in musicology from Rutgers University and has published on the intersections of orality and literacy in early modern Italian musical culture.Rebecca Cypess is Associate Dean for Academic Affairs at the Mason Gross School of the Arts, Rutgers University, where she is also Associate Professor of Music. She is author of Curious and Modern Inventions: Instrumental Music as Discovery in Galileo's Italy and editor (with Nancy Sinkoff) of Sara Levy's World: Gender, Judaism, and the Bach Tradition in Enlightenment Berlin.Liza Malamut is an independent scholar, educator, and historical trombonist; she is Co-Artistic Director of the ensemble Incantare and has been appointed Artistic Director of the Newberry Consort.