Little Prince: The Story of a Shetland Pony (The Breyer Horse Collection #2) (Paperback) 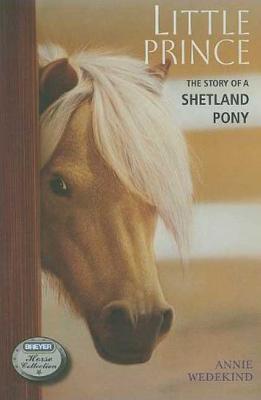 Little Prince: The Story of a Shetland Pony (The Breyer Horse Collection #2) (Paperback)

This is book number 2 in the The Breyer Horse Collection series.

If Dauphin, a pampered Shetland pony, seems to lead the perfect life in the penthouse suite of the city's posh riding stables, it's because he does. And if he seems a bit too self-satisfied—after all, he's won several trophies for his young owner, Isabella, and is widely acknowledged to be the prettiest pony in the city—it's because he is.

Dauphin leads a rich, comfortable life. But all that changes when his relationship with his owner takes a decided turn for the worse. He's suddenly sent away to a farm in the middle of nowhere, which is filled with the most unusual animals. And where, against all odds, he discovers the true meaning of home and family.

Annie Wedekind grew up riding horses in Louisville, Kentucky. Since then, she’s been in the saddle in every place she’s lived, from Rhode Island to New Orleans, South Africa to New York. Her first novel, A Horse of Her Own, was praised by Kirkus as “possibly the most honest horse book since National Velvet . . . A champion.” She is also the author of The Breyer Horse Collection books, including Wild Blue, Little Prince, Samirah’s Ride, and Mercury’s Flight. She lives with her family in Brooklyn, New York.

“A modern-day adventure that reads like an exuberant nature journal, this novel will grip readers from start to finish...Deftly and tenderly, without being overly sentimental, Wedekind describes the subtleties of horse instinct and communication. Horse fans and animal lovers will embrace this book with unbridled enthusiasm. It deserves a place next to Marguerite Henry or even Jack London on young readers' bookshelves.” —School Library Journal on Wild Blue

“Sensitive, sophisticated and lyrically written, Wedekind's debut portrays the typical teen struggle for self-awareness in an anything-but-typical fashion. Possibly the most honest horse book since National Velvet, from an equestrian point-of-view, this offering's riding scenes combine accuracy with seat-of-the-pants excitement. A champion.” —Kirkus Reviews, starred review on A Horse of Her Own