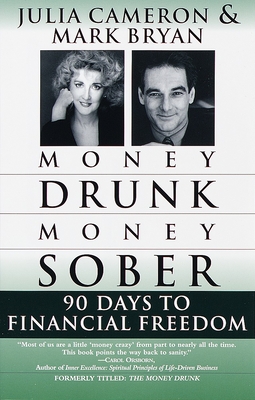 
Out of Stock in store and warehouse. We don’t have a restock date.
In a society where it is often easier to discuss sex than money, many of us have hidden issues about personal finances. But when fending off bill collectors, begging for salary advances, or borrowing from relatives becomes a way of life, unresolved money problems can lead to enormous stress and destroy relationships, careers, and lives. Do you recognize yourself or someone you love in any of these descriptions?

THE COMPULSIVE SPENDER
Do you buy things and hide them?

THE BIG DEAL CHASER
Do you refuse to watch your money because one big deal is going to make everything all right?

THE MAINTENANCE MONEY DRUNK
Is the pay the only thing you like about your job?

THE POVERTY ADDICT
Do you feel morally superior to people with money?

THE CASH CODEPENDENT
Are you afraid to say no to your partner about money?

Through their highly effective seminars, Mark Bryan and Julia Cameron have helped many people get out of debt and free themselves from the painful cycle of acting out with money. The Money Drunk offers new perspectives on the real roots of money problems, showing how to dismantle negative family and societal programming about money and how to undo the destructive patterns that sabotage your financial success. The program teaches new, more constructive habits to anyone who has ever had a problem with money.
Mark Bryan is a teacher, writer, and nationally known speaker in the human potential movement. He is the co-founder (with Julia Cameron) of The Artist's Way. His experience both in developing extremely effective self-help techniques for The Artist's Way and as a reunited father led him to create the Father Project to help estranged fathers.

Julia Cameron has been an active artist for more than three decades. She is the author of more than thirty books, including such bestselling works on the creative process as The Artist’s Way, Walking in This World, and Finding Water. Also a novelist, playwright, songwriter, and poet, she has multiple credits in theater, film, and television, including an episode of Miami Vice, which featured Miles Davis, and Elvis and the Beauty Queen, which starred Don Johnson. She was a writer on such movies as Taxi Driver, New York, New York, and The Last Waltz. She wrote, produced, and directed the award-winning independent feature film God's Will, which premiered at the Chicago International Film Festival, and was selected by the London Film Festival, the Munich International Film Festival, and the Women in Film Festival, among others. In addition to making films, Cameron has taught film at such diverse places as Chicago Filmmakers, Northwestern University, and Columbia College. She is also an award-winning playwright, whose work has appeared on such well-known stages as the McCarter Theater at Princeton University and the Denver Center for the Performing Arts.
“Most of us are a little ‘money crazy’ from part to nearly all the time. This book points the way back to sanity.”—Carol Osborn, author of Inner Excellence: Spiritual Principles of Life-Driven Business