Running Out of Night (Paperback) 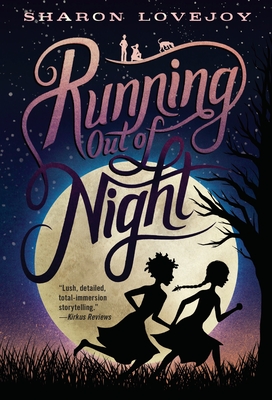 Running Out of Night (Paperback)


This item may not be for sale. Contact store for more information.
A Children’s Book Review Seven Middle Grade Books for African American History Month Pick

Fans of Elijah of Buxton, Trouble Don’t Last, and Stealing Freedom will be drawn to this tale of the incredible journey of an abused twelve-year-old white girl and an escaped slave girl who run away together and form a bond of friendship while seeking freedom.

Every day is a misery for a nameless, motherless Southern girl who is treated cruelly by her pa and brothers. Her life changes forever when a runaway slave named Zenobia turns to her for help and shelter. Longing for her own freedom, the girl decides to run away, and she and Zenobia set off on a harrowing journey. Along the way, Zenobia names the girl Lark, after the bird, for her ability to mimic its song.

Running by night, hiding by day, the girls are pursued by Lark’s pa and brothers and by ruthless slave catchers. Brightwell, another runaway slave, joins them, and the three follow secret signs to a stop on the Underground Railroad. When the hideout is raided and Zenobia and Brightwell are captured, Lark sets out alone to rescue her friends.

"An essential read for those interested in American history."--San Louis Obispo Tribune

"A gritty, engrossing tale.--Slo Coast Journal
Sharon Lovejoy is an award winning, bestselling author and illustrator of non-fiction books about nature and gardening for children and adults. This is her debut novel. She divides her time between the Central Coast of California and Maine.
" Lush, detailed, total-immersion storytelling." - Kirkus Reviews

" What stands out most is the author's depiction of the rural Virginia setting. Lark's knowledge of the natural world leads to a satisfying, nonviolent resolution. An Underground Railroad story with a distinctive flavor." - Booklist Reviews

"Written in a believably rough-edged dialect (a glossary is included) and distinguished by lively descriptions and dialogue, Lovejoy’s story offers a tense account of the perils facing those who sought freedom in the lead-up to the Civil War." - Publisher's Weekly

“The rural, mid-19th-century dialect, coupled with the author's interest in ethnobotany, roots the story deeply in the houses, forests, gardens, and even streambeds of antebellum Virginia.” - School Library Journal

"Rarely do page-turners written for middle-school kids also ignite excitement in adults. (A notable exception is the series of Harry Potter books.) Fewer still explore the secret sorrows of children's lives in the mid-1800s, whether enslaved or free. Running Out of Night, a debut novel from Californian Sharon Lovejoy, a veteran author-illustrator known nationally for her prizewinning nonfiction books on gardening and nature, gives you both. Like Rowling's Potter, her book follows the desperate quest of youngsters who've seen the darker sides of human nature. Instead of Harry, Hermione and Ron, it's preteen girls Lark and Zenobia who flee their grim lives in search of a sunnier, freer world." - Op Ed News