The Witch of Blackbird Pond: A Newbery Award Winner (Hardcover) 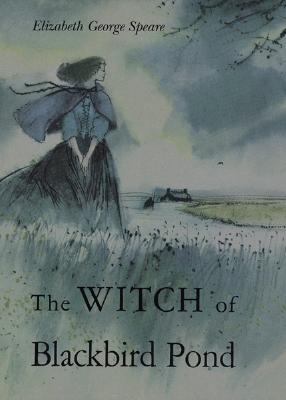 The Witch of Blackbird Pond: A Newbery Award Winner (Hardcover)

Sixteen-year-old Kit Tyler is marked by suspicion and disapproval from the moment she arrives on the unfamiliar shores of colonial Connecticut in 1687. Alone and desperate, she has been forced to leave her beloved home on the island of Barbados and join a family she has never met. Torn between her quest for belonging and her desire to be true to herself, Kit struggles to survive in a hostile place. Just when it seems she must give up, she finds a kindred spirit. But Kit’s friendship with Hannah Tupper, believed by the colonists to be a witch, proves more taboo than she could have imagined and ultimately forces Kit to choose between her heart and her duty.

Elizabeth George Speare won the 1959 Newbery Medal for this portrayal of a heroine whom readers will admire for her unwavering sense of truth as well as her infinite capacity to love.

"I was born in Melrose, Massachusetts, on November 21, 1908. I have lived all my life in New England, and though I love to travel I can't imagine ever calling any other place on earth home. Since I can't remember a time when I didn't intend to write, it is hard to explain why I took so long getting around to it in earnest. But the years seemed to go by very quickly. In 1936 I married Alden Speare and came to Connecticut. Not till both children were in junior high did I find time at last to sit down quietly with a pencil and paper. I turned naturally to the things which had filled my days and thoughts and began to write magazine articles about family living. Then one day I stumbled on a true story from New England history with a character who seemed to me an ideal heroine. Though I had my first historical novel almost by accident it soon proved to be an absorbing hobby." Elizabeth George Speare (1908-1994) won the 1959 Newbery Medal for THE WITCH OF BLACKBIRD POND, and the 1962 Newbery Medal for THE BRONZE BOW. She also received a Newbery Honor Award in 1983, and in 1989 she was presented with the Laura Ingalls Wilder Award for her substantial and enduring contribution to children’s literature.

“The book has a lively plot and excellent characterizations. The background has every dimension of reality.” — New York Times

“Rarely has a book taken us back into seventeenth-century life as this does.” — Herald Tribune

"Kit's vindication, her gradual integration into the community and the positive effect she has on those about her, combine here in a well documented novel." — Kirkus Reviews