The Day You Begin (Hardcover) 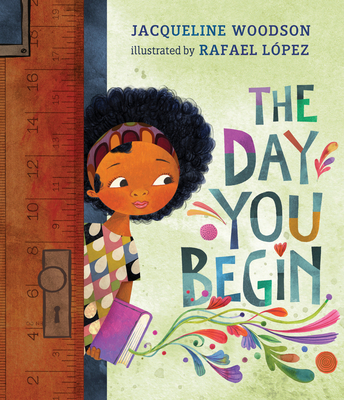 The Day You Begin (Hardcover)

Featured in its own episode in the Netflix original show Bookmarks: Celebrating Black Voices!

National Book Award winner Jacqueline Woodson and two-time Pura Belpré Illustrator Award winner Rafael López have teamed up to create a poignant, yet heartening book about finding courage to connect, even when you feel scared and alone.

There will be times when you walk into a room
and no one there is quite like you.

There are many reasons to feel different. Maybe it's how you look or talk, or where you're from; maybe it's what you eat, or something just as random. It's not easy to take those first steps into a place where nobody really knows you yet, but somehow you do it.

Jacqueline Woodson's lyrical text and Rafael López's dazzling art reminds us that we all feel like outsiders sometimes-and how brave it is that we go forth anyway. And that sometimes, when we reach out and begin to share our stories, others will be happy to meet us halfway.

(This book is also available in Spanish, as El Día En Que Descubres Quién Eres!)
Jacqueline Woodson (www.jacquelinewoodson.com) is the recipient of a 2020 MacArthur Fellowship, the 2020 Hans Christian Andersen Award, the 2018 Astrid Lindgren Memorial Award, and the 2018 Children’s Literature Legacy Award. She was the 2018–2019 National Ambassador for Young People’s Literature, and in 2015, she was named the Young People’s Poet Laureate by the Poetry Foundation. She received the 2014 National Book Award for her New York Times bestselling memoir Brown Girl Dreaming, which was also a recipient of the Coretta Scott King Award, a Newbery Honor, the NAACP Image Award, and a Sibert Honor. She wrote the adult books Red at the Bone, a New York Times bestseller, and Another Brooklyn, a 2016 National Book Award finalist. Born in Columbus, Ohio, Jacqueline grew up in Greenville, South Carolina, and Brooklyn, New York, and graduated from college with a B.A. in English. She is the author of dozens of award-winning books for young adults, middle graders, and children; among her many accolades, she is a four-time Newbery Honor winner, a four-time National Book Award finalist, and a three-time Coretta Scott King Award winner. Her books include Coretta Scott King Award winner Before the Ever After; New York Times bestsellers The Day You Begin and Harbor Me; The Other Side, Each Kindness, Caldecott Honor book Coming On Home Soon; Newbery Honor winners Feathers, Show Way, and After Tupac and D Foster; and Miracle's Boys, which received the LA Times Book Prize and the Coretta Scott King Award. Jacqueline is also a recipient of the Margaret A. Edwards Award for lifetime achievement for her contributions to young adult literature and a two-time winner of the Jane Addams Children's Book Award. She lives with her family in Brooklyn, New York.

* “National Book Award winner and national treasure Jacqueline Woodson teams up with two-time Pura Belpré Award recipient Rafael López to deliver an empowering message to any child who has ever felt too different. . . . Woodson and López offer a needed message of comfort to preschool and early elementary students. Woodson's lulling free verse reassures the reader that the world will ‘make some space,’ while López's dreamy, near-translucent mixed-media illustrations thrum with playful joy. This gentle, powerful ode to diversity and acceptance belongs with all children.”—Shelf Awareness, starred review

* “A beautiful and inclusive story that encourages children to find the beauty in their own lives and share it with the world. . . . Each child feels very alone until they begin to share their stories and discover that it is nearly always possible to find someone a little like you. López’s vibrant illustrations bring the characters’ hidden and unspoken thoughts to light with fantastic, swirling color. Shifting hues and textures across the page convey their deep loneliness and then slowly transition into bright hopeful possibilities. Full-bleed illustrations on every page are thick with collaged patterns and textures that pair perfectly with melodic prose that begs to be read aloud. . . . There’s an essential acknowledgment that everyone will experience a time when no one is quite like them, when they can’t find their voice, or when they feel very alone. Woodson’s superlative text sees each character turn that moment of desolation into an opportunity to be brave and find hope in what they have in common. This masterful story deserves a place in every library.”—School Library Journal, starred review

* “A bright jewel-toned palette and clever details, including a literal reflection of a better future, reveal hope and pride. . . . This reassuring, lyrical book feels like a big hug from a wise aunt as she imparts the wisdom of the world in order to calm trepidatious young children: One of these things is not like the other, and that is actually what makes all the difference. A must-have book about the power of one’s voice and the friendships that emerge when you are yourself.”—Kirkus Reviews, starred review

* “Woodson’s poetic lines give power to each child’s experience. . . . López paints the book’s array of children as students in the same classroom; patterns and colors on the children’s clothing and the growing things around them fill the spreads with life. Woodson’s gentle, lilting story and López’s artistry create a stirring portrait of the courage it takes to be oneself.”—Publishers Weekly, starred review

* “Woodson’s lyrical text is gently reassuring as it moves between broad discussion and specific examples of difference and discomfort, which emphasize children moving across cultures but will speak to children from all backgrounds and experiences. Mixed-media illustrations . . . combine bold with soft colors and textures in a slightly shaded tropical palette; compositions employ creative and insightful perspectives to suit the characters’ feelings. . . . The artist frequently incorporates a ruler into the illustrations, which perhaps speaks to the children’s perceptions of how they measure up to others. This lovely and sensitive treatment of adjustment deserves a spot in any collection for youngsters.”—The Bulletin of the Center for Children’s Books, starred review

“Woodson catches the uncertainty, even fear, that comes with new situations. But her lyrical language also captures the moment when confidence sparks and friendships are born. . . . The bold, bright artwork features a diverse cast of kids. . . . The important message plays out in a striking design that mixes the everyday with flights of fancy. Woodson, a recent National Ambassador for Young People’s Literature, is one of kidlit's brightest stars, and this should find lots of eager hands.”—Booklist

“What will it take for a child who feels different to share her stories? . . . Like Woodson’s memoir Brown Girl Dreaming, this story places great value on literacy, reading, and imagination. The matte-finished pages feature illustrations in vivid, brilliant colors, with repeated appearances of flying birds and lush, twining vines and flowers.”—Horn Book