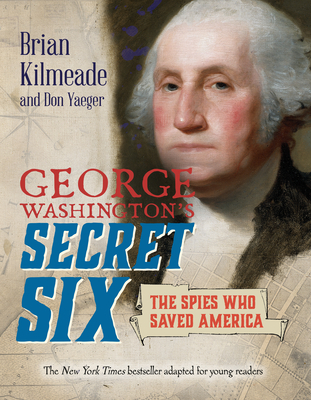 
Available to Ship from Warehouse - usually ships in 6 - 10 days.
A page-turning middle-grade adaptation of the New York Times bestseller about George Washington's top-secret spy ring that helped defeat the British.

The American Revolution is well under way in 1776, but things are looking bleak for General George Washington and his Continental Army. With Washington's hasty retreat from New York City in August, many think the war might soon be over. After all: how on earth is this ragtag group going to defeat its enemy, the well-trained and well-funded military of the largest empire in history?

But Washington soon realizes he can't win with military might. Instead, he must outsmart the British, so he creates a sophisticated intelligence network: the top-secret Culper Spy Ring. Drawing on extensive research, Brian Kilmeade and Don Yaeger tell the fascinating stories of these long unrecognized spies: a reserved merchant, a tavern keeper, a brash young longshoreman, a curmudgeonly Long Island bachelor, a coffeehouse owner, and a mysterious woman.

This vivid and accessible young readers adaptation of the New York Times bestseller features an exclusive new introduction, extensive back matter, and eye-catching art throughout. Chronicling a crucial moment in American history, this historical thriller will excite and inspire the next generation of patriots.
Brian Kilmeade is the co-author of George Washington's Secret Six, a New York Times bestseller for more than five months. He co-hosts Fox News Channel's morning show Fox & Friends and hosts the daily national radio show Kilmeade & Friends. He lives on Long Island.

Don Yaeger is an award-winning keynote speaker, business leadership coach, and author of more than two dozen books, including nine New York Times bestsellers. A world-class storyteller, Yaegar draws on his personal experiences as well as those with a host of sports legends to inspire audiences from Fortune 500 companies to cancer survivor groups. He lives in Tallahassee, Florida, with his wife, Jeanette, and their two children.

Accolades for the adult edition of George Washington's Secret Six:

"This is my kind of history book. Get ready. Here's the action." —Brad Meltzer, New York Times bestselling author of the Ordinary People Change the World series

"The tale of patriotism and daring." —The Washington Times

"A powerful new book . . . that reads like a modern-day spy thriller." —TheBlaze