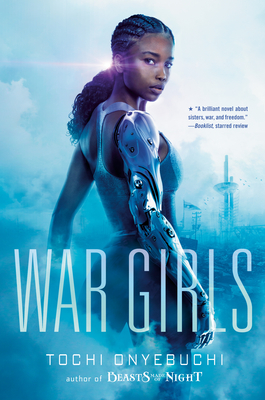 
Available to Ship from Warehouse - usually ships in 6 - 10 days.
Two sisters are torn apart by war and must fight their way back to each other in a futuristic, Black Panther-inspired Nigeria.

The year is 2172. Climate change and nuclear disasters have rendered much of earth unlivable. Only the lucky ones have escaped to space colonies in the sky.

In a war-torn Nigeria, battles are fought using flying, deadly mechs and soldiers are outfitted with bionic limbs and artificial organs meant to protect them from the harsh, radiation-heavy climate. Across the nation, as the years-long civil war wages on, survival becomes the only way of life.

Two sisters, Onyii and Ify, dream of more. Their lives have been marked by violence and political unrest. Still, they dream of peace, of hope, of a future together.

And they're willing to fight an entire war to get there.

Acclaimed author, Tochi Onyebuchi, has written an immersive, action-packed, deeply personal novel perfect for fans of Nnedi Okorafor, Marie Lu, and Paolo Bacigalupi.
Tochi Onyebuchi is a writer based in Connecticut. He holds a BA from Yale, an MFA in screenwriting from Tisch, and a JD from Columbia Law School. Tochi is the author of Beasts Made of Night and Crown of Thunder.

"A brilliant novel about sisters, war, and freedom."--Booklist, starred review

“Onyebuchi has created a fascinating futuristic Nigeria and a plot filled with left hooks and upper cuts, even as he nobly illuminates one of the most pervasive conditions of the human experience.”--The New York Times Book Review

"Set amid the horrors of war in a world ravaged by climate change and nuclear disaster, this heart-wrenching and complex page-turner, drawn from the 1960s Nigerian civil war, will leave readers stunned and awaiting the second installment."--Publishers Weekly, starred review

"The intense plot is narrated in alternating third-person perspectives, and the author explores themes surrounding colonization, family, and the injustices of war. The story culminates in an unexpected, heart-wrenching end. An exhilarating series opener."--Kirkus Reviews

"[A] compulsively readable story with high action and high drama in equal measure. Perfect for fans of Paolo Bacigalupi’s novels and the Pacific Rim films."--SLJ

“War Girls is a brutal and spectacular feat of imagination.”--Dhonielle Clayton, New York Times bestselling author of The Belles series.