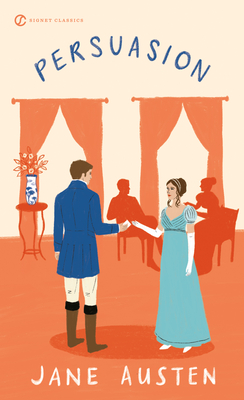 
Available to Ship from Warehouse - usually ships in 6 - 10 days.
Featuring one of her most likeable characters, this sparkling love story set in a seaside resort is Jane Austen’s final finished work.

“There could have been no two hearts so open, no tastes so similar, no feelings so in unison.”

Since Anne Elliot eight years ago rejected the marriage proposal of Captain Wentworth, a penniless naval officer, she has resigned herself to a quiet life at home, tending to the imagined needs of her spoiled sisters and vain father. But when Captain Wentworth reappears in their midst, having made his fortune at sea, Anne must ask herself whether she made the right decision—or allowed herself to be persuaded against her heart.

Jane Austen’s last completed novel and her most optimistic and romantic work, Persuasion gives full scope to the author’s artistic powers, blending sharp wit and warm sympathy, stylistic brilliance and matchless insight. It is a story that affirms the lasting power of love and the rejuvenating power of hope.

With an Introduction by Margaret Drabble
and an Afterword by Diane Johnson
Jane Austen (1775-1817) was born in Hampshire, England, to George Austen, a rector, and his wife, Cassandra. Like many girls of her day, she was educated at home, where she began her literary career by writing parodies and skits for the amusement of her large family. Although Austen did not marry, she did have severa; suitors and once accepted a marriage proposal, but only for an evening. Although Austen never lived apart from her family, her work shows a woldly and wide sinsibility. Her novels include Sense and Sensibility (1811), Pride and Prejudice (1813), Mansfield Park (1814), Emma (1815), and Northanger Abbey and Persuasion, published together posthumously in 1818.

Margaret Drabble is the highly accalimed novelist, biographer, and editor of The Oxford Companion to English Literature. Her novels include The Gates of Ivory, The Seven Sisters, and The Red Queen. She lives in London.

Diane Johnson is the author of ten novels, including Le Divorce and L'Affaire, two books of essays, two biogrpahies, and the screenplay for Stanley Kubrick's classic film The Shinning. She has been a finalist twice for both the Pulitzer Prize and the National Book Award.

“Critics, especially [recently], value Persuasion highly, as the author’s ‘most deeply felt fiction,’ ‘the novel which in the end the experienced reader of Jane Austen puts at the head of the list.’ . . . Anne wins back Wentworth and wins over the reader; we may, like him, end up thinking Anne’s character ‘perfection itself.’” –from the Introduction by Judith Terry