Moby Dick or, The Whale (Hardcover) 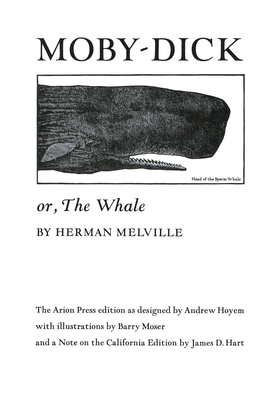 Moby Dick or, The Whale (Hardcover)


Available to Ship from Warehouse - Ships in 3 - 6 days.
This trade edition of Moby-Dick is a reduced version of the Arion Press Moby-Dick, which was published in 1979 in a limited edition of 250 copies and has been hailed as a modern masterpiece of bookmaking. It was hand set under the supervision of one of America's finest book designers and printers. The initial letters that begin each chapter were designed especially for this book and christened "Leviathan." The illustrations, of places, creatures, objects or tools, and processes connected with nineteenth-century whaling, are original boxwood engravings by Massachusetts artist Barry Moser. The text of Moby-Dick used in this edition is based on that used in the critical edition of Melville's works published by the Northwestern University Press and the Newberry Library.

This reduced version is smaller in size than the Arion edition and the California deluxe edition, but it includes all of the original pages and illustrations. It is printed in black only throughout, and it is not slipcased.

"Andrew Hoyem’s Arion Press edition of Moby Dick, published in San Francisco in 1979, in an edition of 265 total copies, is considered one of the two or three greatest American fine press books ever. . . .a trade edition published by University of California Press retains the look of the type and the illustrations, done in woodcut by Barry Moser."
— The New Antiquarian

"A great American edition with features more diverse than those in any previous edition of Melville's classic."
— Stuart C. Sherman,