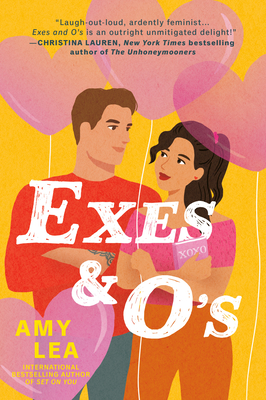 THIS IS A PRE-ORDER - Click details below for publication date

This is book number 2 in the The Influencer Series series.

A romance novel-obsessed social media influencer revisits her exes on her hunt for true love in this romantic comedy from the author of Set On You.

Romance book connoisseur Tara Chen has had her heart broken ten times by ten different men—all of whom dumped her because of her “stage-five clinger” tendencies. Nevertheless, Tara is determined to find The One. The only problem? Classic meet-cutes are dead, thanks to modern dating apps. So Tara decides to revisit her exes in hopes of securing her very own trope-worthy second-chance romance.

Boston firefighter Trevor Metcalfe will be the first to rush into a burning building but the last to rush into a relationship. Love just isn’t his thing. When his new roommate Tara enlists him to help her reconnect with her exes, he reluctantly agrees. But Tara’s journey is leading him to discover his own new chapter.

The more time they spend together, the more Tara realizes Trevor seems to be the only one who appreciates her authentic, dramatic self. To claim their happily ever after, can Tara and Trevor read between the lines of their growing connection?
Amy Lea is an Asian Canadian government analyst who runs the Bookstagram account @amyleabooks, where she promotes and reviews contemporary romance novels. Set on You is her debut novel.
"‘Unapologetically romantic, wonderfully sexy, always brilliant. I adored Set On You, but Exes and O’s is the stuff bookish dreams are made of. With this stunning sophomore novel, Amy Lea has officially rocketed her way into my heart as a must read author!“—Ali Hazelwood, New York Times bestselling author

“Amy Lea’s Exes and O’s is for anyone who’s ever dreamed their book boyfriend could exist in real life. It’s a charming and funny friends-to-lovers romance that sparkles with Amy’s signature sweetness and steam.”—Carley Fortune, New York Times bestselling author of Every Summer After

“Laugh out loud, ardently feminist, and with a hero straight out of a fevered daydream, Exes and O's is an outright, unmitigated delight!”—Christina Lauren, New York Times bestselling authors of The Unhoneymooners

“Exes and O’s is every rom-com reader’s dream, a delightfully meta romp with a heroine who loves tropes as much as her readers. Tara’s quest to find herself a second-chance romance of her own is swoony, hilarious and ends in the perfect HEA.”—Emily Wibberley and Austin Siegemund-Broka, authors of The Roughest Draft

“A gorgeous friends-to-lovers slow-burn, Exes and O’s is filled with fun, charm and an appealing hero who sees and loves the protagonist for exactly who she is. A perfect mix of relatable characters, hilarious banter, and steam, Exes and O’s is for everyone who has wondered about past relationships and future loves.”—Lily Chu, author of The Stand-In

"I flew through this book—Amy Lea packed every sentence with so much hilarity and heart. Get ready for some trope-y goodness in Exes and O's, including a meta awareness of those same tropes that's a blast to read. If you love the roommate vibes of New Girl, a heroine who's unabashedly 'extra,' and a hero who unabashedly accepts her for who she is, you won't want to miss this one!"—Alicia Thompson, national bestselling author of Love in the Time of Serial Killers

“The resulting romance is as sensitive and swoony as it is self-aware, playfully engaging popular romance tropes. This is a winner.”—Publishers Weekly (starred review)

"Lea's follow-up to Set on You (2022) is a hilarious, relatable exploration of life and love, filled to brimming with soft moments, small gestures, and a clear love of the romance genre itself...A comically delightful romance about how the best love stories are found where you least expect them."—Kirkus (starred review)