Heroes Like Us: Two Stories: The Day We Met the Queen; The Great Food Bank Heist (Library Binding) 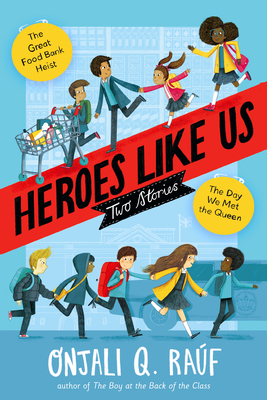 Heroes Like Us: Two Stories: The Day We Met the Queen; The Great Food Bank Heist (Library Binding)


Coming Soon - Available for PRE-ORDER - Please check release date
From Onjali Q. Rauf, acclaimed author of The Boy At the Back of the Class, come two poignant tales of modern-day heroism, featuring supermarket theives, a visit with the Queen, and plenty of laughs!

Ten-year old Ahmet, once known as the "Boy at the Back of the Class", became the Most Famous Refugee Boy in the World when he and his friends stood up for refugee children like him all over Britain. But they're just getting started!

THE DAY WE MET THE QUEEN

Ahmet and his friends have been invited to tea—by none other than the Queen of England herself! But when their journey is unexpectedly interrupted by an old enemy, it will take some quick thinking and an ingenious plan to make it to the palace—and the queen—on time.

On Thursdays, Nelson, Ashley and Mum head out to the food bank. With its shining cans and boxes of food stacked from floor to ceiling, Nelson thinks it’s the best kind of bank there is. But there’s a thief in town, and the shelves of the food bank are getting emptier each day.

One thing is for certain: someone has to put a stop to the robberies. And Nelson and his friends plan to do just that, with a daring supermarket stake-out that's sure to catch the Food Bank Theives—if they don't get found out first!

In this two-novella collection, discover kid heroes making a difference in the world, featuring old friends and some new classmates you won't want to leave.
Onjali Q. Raúf is the founder and CEO of Making HerStory, a UK nonprofit that works to fight human trafficking and gender-based abuses and crimes. She is the author of The Boy at the Back of the Class, The Star Outside My Window, and The Night Bus Hero. She lives in the UK. You can find her on Twitter at @OnjaliRauf.