The Bright Side (Hardcover) 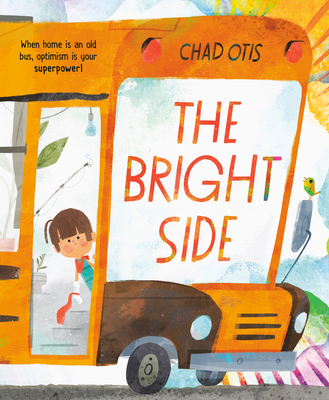 The Bright Side (Hardcover)


Coming Soon - Available for PRE-ORDER - Please check release date
This endearing picture book about making the most of any situation is also a heartfelt and meaningful portrait of houselessness that’s just right for young children.

Sometimes it’s hard to stay positive: when you live in an old school bus instead of a normal house; when you have mostly just bread and ketchup to eat; and especially when you have to go to a new school where all the other kids already have friends. But the sweet and creative boy in this story discovers that he can do things he never thought possible, by using the skills his parents have taught him: imagining . . . and trying . . . and finding a way to look on the bright side.

This honest, accessible, and compassionate story is based on the author’s own childhood. Its message about resourcefulness and courage will resonate with every reader.
Chad Otis received his BFA in design from the University of Washington and then worked with Nickelodeon, Cartoon Network, Disney, Mattel, Hasbro, Nintendo, and DreamWorks for over twenty years as an animator, illustrator, and creative director. He now devotes himself to writing and illustrating children’s books. He lives with his wife in Boise, Idaho.