Jeremy's Journey: A season of action, a lifetime of memories (Paperback) 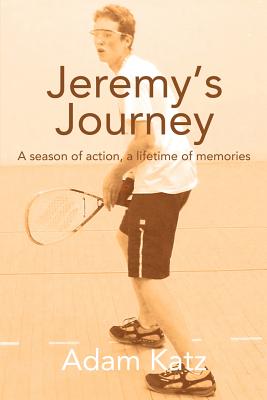 Jeremy's Journey: A season of action, a lifetime of memories (Paperback)


Available to Ship from Warehouse - usually ships in 6 - 10 days.
(This item cannot be returned.) No refunds or exchanges
In May 2004, Jeremy Lanosga was a talented competitive racquetball player with a promising future in the world of sports. On a beautiful Sunday evening, Jeremy decided to travel to the Garden of the Gods in Colorado Springs, Colorado, to take photographs of the sunset. While preparing to descend a rock formation, he slipped and plummeted more than fifty feet-fracturing the C5 vertebrae in his neck. The tragic fall left him clinging to life and paralyzed from the neck down. Author Adam Katz is Jeremy's friend and has been playing tournament racquetball for more than twenty years. Jeremy's Journey is the culmination of his experiences during the 2004 racquetball season-both documented for and dedicated to Jeremy so that his friend could experience the season through Katz's perspective. Beginning with the 2004 National Singles Championships in Houston, Texas, Katz describes his training regimen and the grueling matches, as well as the exciting and spirited tournaments. Jeremy's Journey is a touching tribute to a friendship between two young athletes and demonstrates the unwavering determination that Adam Katz calls upon in order to keep true to his pledge to Jeremy.