The Difference Between You and Me (Hardcover) 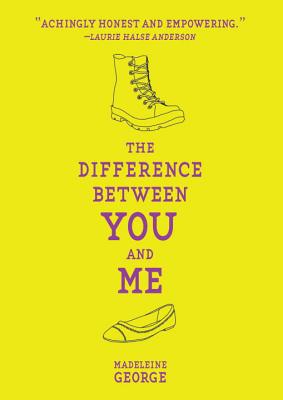 The Difference Between You and Me (Hardcover)

Jesse cuts her own hair with a Swiss Army knife. She wears big green fisherman's boots. She's the founding (and only) member of NOLAW, the National Organization to Liberate All Weirdos. Emily wears sweaters with faux pearl buttons. She's vice president of the student council. She has a boyfriend.

These two girls have nothing in common, except the passionate "private time" they share every Tuesday afternoon. Jesse wishes their relationship could be out in the open, but Emily feels she has too much to lose. When they find themselves on opposite sides of a heated school conflict, they each have to decide what's more important: what you believe in, or the one you love?

Madeleine George is an award-winning playwright and a founding member of the playwriting collective 13P. She is also the director of the Bard College satellite campus at Bayview Women s Correctional Facility in Manhattan. Ms. George lives in New York City."

Praise for The Difference Between You and Me by Madeleine George:

"The characters are vivid ... and the desire Jesse and Emily feel for each other jumps off the page .... Readers of Julie Ann Peters, Laurie Halse Anderson, Sarah Zarr, and Sarah Dessen will welcome this addition to collections of realistic fiction." —School Library Journal, starred review

"Teens expecting a run-of-the-mill romance are in for a surprise with George's (Looks, 2008) smart, multilayered novel told in alternating viewpoints." —Booklist