Memory Speaks: On Losing and Reclaiming Language and Self (Hardcover) 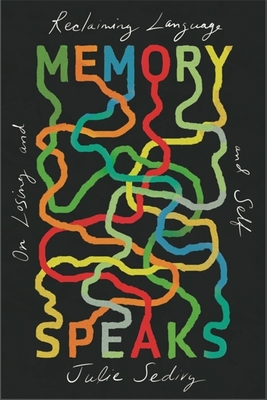 Memory Speaks: On Losing and Reclaiming Language and Self (Hardcover)

From an award-winning writer and linguist, a scientific and personal meditation on the phenomenon of language loss and the possibility of renewal.

As a child Julie Sedivy left Czechoslovakia for Canada, and English soon took over her life. By early adulthood she spoke Czech rarely and badly, and when her father died unexpectedly, she lost not only a beloved parent but also her firmest point of connection to her native language. As Sedivy realized, more is at stake here than the loss of language: there is also the loss of identity. Language is an important part of adaptation to a new culture, and immigrants everywhere face pressure to assimilate. Recognizing this tension, Sedivy set out to understand the science of language loss and the potential for renewal. In Memory Speaks, she takes on the psychological and social world of multilingualism, exploring the human brain's capacity to learn--and forget--languages at various stages of life. But while studies of multilingual experience provide resources for the teaching and preservation of languages, Sedivy finds that the challenges facing multilingual people are largely political. Countering the widespread view that linguistic pluralism splinters loyalties and communities, Sedivy argues that the struggle to remain connected to an ancestral language and culture is a site of common ground, as people from all backgrounds can recognize the crucial role of language in forming a sense of self. Distinctive and timely, Memory Speaks combines a rich body of psychological research with a moving story at once personal and universally resonant. As citizens debate the merits of bilingual education, as the world's less dominant languages are driven to extinction, and as many people confront the pain of language loss, this is badly needed wisdom.