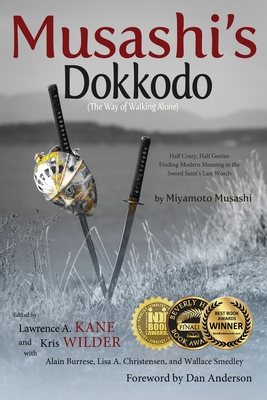 By Lawrence a. Kane (Editor), Kris Wilder (Editor), Alain Burrese
$22.33
Available to Ship from Warehouse - Ships in 3 - 6 days.
(This item cannot be returned.)

"The authors have made classic samurai wisdom accessible to the modern martial artist like never before." - Goran Powell, award winning author of Chojun and A Sudden Dawn"It's fascinating stuff " - Steve Perry, New York Times bestselling author"The precepts offer priceless advice to anyone." - Kate Vitasek, University of Tennessee"The five point perspective inspired deep introspection. I have been elevated to higher and deeper levels of personal and professional growth by reading this book." - Laela Erickson, Senior Business Development ExecutiveMiyamoto Musashi (1584 - 1645) was arguably the greatest swordsman who ever lived, a legendary figure whose methods of thought and strategy have been studied and adopted across a wide spectrum of society, from martial artists to military leaders to captains of industry. The iconic sword saint of Japan was clearly a genius, yet he was also a functional psychopath-ruthless, fearless, hyper-focused, and utterly without conscience. Shortly before he died, Musashi wrote down his final thoughts about life for his favorite student Terao Magonojo to whom Go Rin No Sho, his famous Book of Five Rings, had also been dedicated. He called this treatise Dokkodo, which translates as "The Way of Walking Alone."The book you hold in your hands is the definitive interpretation of Musashi's final work. Readers are oftentimes subject to a single perspective about what some famous author from the past had to say, yet we are more holistic here. This treatise contains Musashi's original 21 precepts of the Dokkodo along with five different interpretations of each passage written from the viewpoints of a monk, a warrior, a teacher, an insurance executive, and a businessman. Each contributor has taken a divergent path from the others, yet shares the commonality of being a lifelong martial practitioner and published author. In this fashion you are not just reading a simple translation of Musashi's writing, you are scrutinizing his final words for deeper meaning. In them are enduring lessons for how to lead a successful and meaningful life.

Br. Kris Wilder, OSF is a member of The Order of St. Francis, one of many active Apostolic Christian Orders. A National Representative for the University of New Mexico's Institute of Traditional Martial Arts, he has earned black belts in three styles and teaches martial arts seminars world-wide. Alain Burrese, J.D. is a former US Army sniper instructor who taught at the 2nd Infantry Division Scout Sniper School at Camp Casey, South Korea. He is also an attorney, speaker, and personal security, safety and self-defense instructor who has earned a 5th degree black belt in Hapkido. Wallace Smedley is an educator who has worked for Chuck Norris' KICKSTART KIDS Foundation since 2002, and helped develop their Character Education Values Curriculum. Teaching karate in the public school system, he has helped thousands of kids build character and enhance their self-esteem. Lisa Christensen has worked as a Workers' Comp Claims Examiner for over 30 years. An insurance executive, she is certified to adjudicate claims in Oregon and retains an Oregon General Lines Adjuster License. She has earned black belts in taekwondo and American Freestyle Karate. Lawrence Kane, COP-GOV is a Certified Outsourcing Professional in Governance and a senior leader at a Fortune(R) 50 corporation where, among other things, he is responsible for the strategy for a $1.1B per year organization. He has been studying and teaching martial arts since 1970. Dan Anderson, who wrote the foreword, is a retired karate tournament champion who was rated in the national top 10 ratings four years in a row. Founder of the MA80 System of Arnis/Eskrima, he received the Gat Andres Bonafacio award from the Philippine Classical Arnis society in 2008. A 9th dan black belt, he has authored 20 books on karate and Filipino Martial Arts as well as produced 25 DVDs on the subjects.

END_OF_DOCUMENT_TOKEN_TO_BE_REPLACED

This feature require that you enable JavaScript in your browser.
END_OF_DOCUMENT_TOKEN_TO_BE_REPLACED

This feature require that you enable JavaScript in your browser.
END_OF_DOCUMENT_TOKEN_TO_BE_REPLACED

This feature require that you enable JavaScript in your browser.
END_OF_DOCUMENT_TOKEN_TO_BE_REPLACED