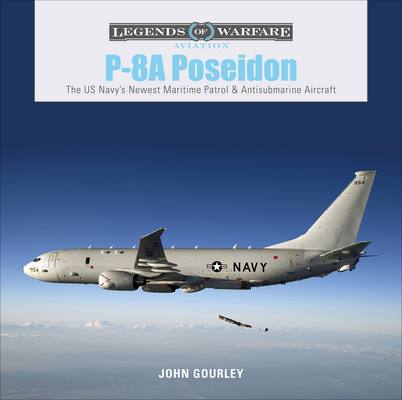 This is book number 29 in the Legends of Warfare: Aviation series.

The P-8A Poseidon, a variant of the Boeing 737 series of airliner, takes over the role of antisubmarine warfare from the P-3 Orion, itself a derivative of an airliner, the Lockheed Electra. The P-8A brings new capabilities, endurance, and crew enhancements to the art form of maritime patrol, surveillance, and reconnaissance. The Poseidon also brings with it weapons such as antiship missiles, mines, torpedoes, and bombs. It can lay down sonobuoys to detect, track, and attack submarines that are quieter, deeper diving, and more stealthy than ever before. The ability to perform search and rescue, assist stranded victims of an incident at sea, and coordinate rescue efforts is unparalleled. The P-8A can connect to tactical networks to relay data it collects, or it can receive information and play a part in a larger operation involving several platforms, from surface ships to aircraft and ground facilities.
John Gourley is a military veteran with a career as a crash/rescue fire protection specialist with the United States Air Force, and as a civilian working for the US government. His lifelong hobby has been photographing military hardware.