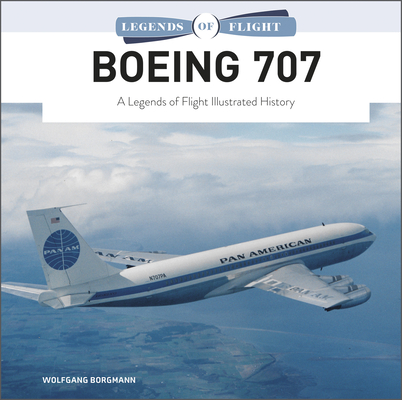 
This item may not be for sale. Contact store for more information.
Beginning in the late 1950s, the Boeing 707 revolutionized passenger aviation like almost no other aircraft, as the elegant four-engine aircraft made it possible to serve intercontinental long-haul routes quickly and economically. This volume in the Legends of Flight series examines the history of this classic jet aircraft, whose memorable design has survived to this day, its basic features still recognizable in the Boeing 737. The history of 707 operations is presented in detail, as is the use of the type by various world military forces and governments--and its famed use as the US presidential Air Force One in the 1960s through the 1980s. Its use by many of the world's most famous airlines, including American, TWA, Pan Am, Northwest, Continental, Air France, British Airways, Lufthansa, Cathay Pacific, and Air India, is also covered. Technical specifications for the 707, the Dash 80 prototype, the Boeing 720 (derived from the 707), the aerial refueler KC-135, and E-3 Sentry, as well as contemporaneous photographs, bring to life the fascinating history of Boeing's first commercial jetliner.