Devotion: An Epic Story of Heroism, Friendship, and Sacrifice (Paperback) 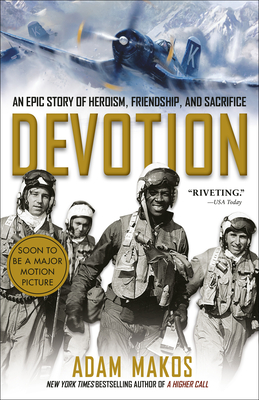 Devotion: An Epic Story of Heroism, Friendship, and Sacrifice (Paperback)


Available to Ship from Warehouse - usually ships in 6 - 10 days.
THE NATIONAL BESTSELLER • NOW A MAJOR MOTION PICTURE • From America’s “forgotten war” in Korea comes an unforgettable tale of courage by the author of A Higher Call.

“In the spirit of Unbroken and The Boys in the Boat comes Devotion.”—Associated Press • “Aerial drama at its best—fast, powerful, and moving.”—Erik Larson

Devotion tells the inspirational story of the U.S. Navy’s most famous aviation duo, Lieutenant Tom Hudner and Ensign Jesse Brown, and the Marines they fought to defend. A white New Englander from the country-club scene, Tom passed up Harvard to fly fighters for his country. An African American sharecropper’s son from Mississippi, Jesse became the navy’s first Black carrier pilot, defending a nation that wouldn’t even serve him in a bar.

While much of America remained divided by segregation, Jesse and Tom joined forces as wingmen in Fighter Squadron 32. Adam Makos takes us into the cockpit as these bold young aviators cut their teeth at the world’s most dangerous job—landing on the deck of an aircraft carrier—a line of work that Jesse’s young wife, Daisy, struggles to accept.

Deployed to the Mediterranean, Tom and Jesse meet the Fleet Marines, boys like PFC “Red” Parkinson, a farm kid from the Catskills. In between war games in the sun, the young men revel on the Riviera, partying with millionaires and even befriending the Hollywood starlet Elizabeth Taylor. Then comes the conflict that no one expected: the Korean War.

Devotion takes us soaring overhead with Tom and Jesse, and into the foxholes with Red and the Marines as they battle a North Korean invasion. As the fury of the fighting escalates and the Marines are cornered at the Chosin Reservoir, Tom and Jesse fly, guns blazing, to try and save them. When one of the duo is shot down behind enemy lines and pinned in his burning plane, the other faces an unthinkable choice: watch his friend die or attempt history’s most audacious one-man rescue mission.

A tug-at-the-heartstrings tale of bravery and selflessness, Devotion asks: How far would you go to save a friend?
Hailed as “a masterful storyteller” by the Associated Press, Adam Makos is the author of the New York Times bestseller A Higher Call and the critically acclaimed Devotion. Inspired by his grandfathers’ service, Adam chronicles the stories of American veterans with his trademark fusion of intense human drama and close-up military action, securing his place “in the top ranks of military writers,” according to the Los Angeles Times. In the course of his research, Adam has flown a World War II bomber, accompanied a Special Forces raid in Iraq, and journeyed into North Korea in search of an MIA American serviceman.

“A masterful storyteller . . . [Makos brings] Devotion to life with amazing vividness. . . . [It] reads like a dream. The perfectly paced story cruises along in the fast lane—when you’re finished, you’ll want to start all over again.”—Associated Press

“A delight to read . . . Devotion is a story you will not forget.”—The Washington Times

“My great respect for Tom Hudner knows no bounds. He is a true hero; and in reading this book, you will understand why I feel that way.”—President George H. W. Bush

“This is aerial drama at its best—fast, powerful, and moving.”—Erik Larson, #1 New York Times bestselling author of The Splendid and the Vile

“Lovingly rendered and meticulously researched, here is a tale of true friendship across the racial divide. Though it concerns a famously cold battle in the Korean War, make no mistake: Devotion will warm your heart.”—Hampton Sides, New York Times bestselling author of Ghost Soldiers

“At last, the Korean War has its epic, a story that will stay with you long after you close this book.”—Eric Blehm, New York Times bestselling author of Fearless

“In this beautifully written book, Adam Makos reveals a long-lost story of heroism set in the frozen realm of North Korea. You won’t be able to put it down.”—Joseph L. Galloway, co-author of the #1 New York Times bestseller We Were Soldiers Once . . . and Young

“Adam Makos immerses you in a story so crisp that you’ll forget you’re reading a book. Prepare to be swept away.”—Michael Tougias, co-author of The Finest Hours

“Once again, Adam Makos demonstrates himself as a rising star in historical nonfiction. Getting the story is only half the battle. Telling the story is where he thrives.”—Colin Heaton, co-author of The Star of Africa