Sir Barton and the Making of the Triple Crown (Hardcover) 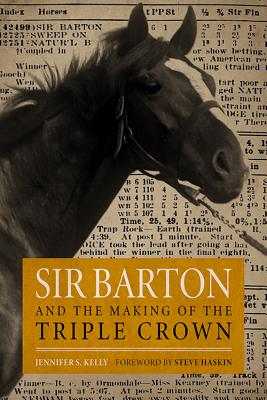 Sir Barton and the Making of the Triple Crown (Hardcover)

He was always destined to be a champion. Royally bred, with English and American classic winners in his pedigree, Sir Barton shone from birth, dubbed the "king of them all." But after a winless two-year-old season and a near-fatal illness, uncertainty clouded the start of Sir Barton's three-year-old season. Then his surprise victory in America's signature race, the Kentucky Derby, started him on the road to history, where he would go on to dominate the Preakness and the Belmont Stakes, completing America's first Triple Crown.

His wins inspired the ultimate chase for greatness in American horse racing and established an elite group that would grow to include legends like Citation, Secretariat, and American Pharoah. After a series of dynamic wins in 1920, popular opinion tapped Sir Barton as the best challenger for the wonder horse Man o' War, and demanded a match race to settle once and for all which horse was the greatest. That duel would cement the reputation of one horse for all time and diminish the reputation of the other for the next century -- until now.

Sir Barton and the Making of the Triple Crown is the first book to focus on Sir Barton, his career, and his historic impact on horse racing. Author Jennifer S. Kelly uses extensive research and historical sources to examine this champion's life and achievements. Kelly charts how Sir Barton broke track records, scored victories over other champions, and sparked the yearly pursuit of Triple Crown glory. This book reveals the legacy of Sir Barton and his seminal contributions to Thoroughbred racing one hundred years after his pioneering achievement.

Jennifer S. Kelly is a lifelong horse racing fan using her experience as a writing instructor and technical writer to chronicle and preserve the history of her favorite sport, especially the Triple Crown. Sir Barton and the Making of the Triple Crown is her first book.