The Revolution Will Not Be Funded: Beyond the Non-Profit Industrial Complex (Paperback) 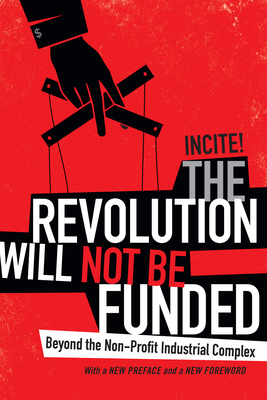 The Revolution Will Not Be Funded: Beyond the Non-Profit Industrial Complex (Paperback)

By Incite! Women of Color Against Incite!


Available to Ship from Warehouse - usually ships in 6 - 10 days.
A trillion-dollar industry, the US non-profit sector is one of the world's largest economies. From art museums and university hospitals to think tanks and church charities, over 1.5 million organizations of staggering diversity share the tax-exempt 501(c)(3) designation, if little else. Many social justice organizations have joined this world, often blunting political goals to satisfy government and foundation mandates. But even as funding shrinks, many activists often find it difficult to imagine movement-building outside the non-profit model. The Revolution Will Not Be Funded gathers essays by radical activists, educators, and non-profit staff from around the globe who critically rethink the long-term consequences of what they call the "non-profit industrial complex." Drawing on their own experiences, the contributors track the history of non-profits and provide strategies to transform and work outside them. Urgent and visionary, The Revolution Will Not Be Funded presents a biting critique of the quietly devastating role the non-profit industrial complex plays in managing dissent. Contributors. Christine E. Ahn, Robert L. Allen, Alisa Bierria, Nicole Burrowes, Communities Against Rape and Abuse (CARA), William Cordery, Morgan Cousins, Ruth Wilson Gilmore, Stephanie Guilloud, Adjoa Flor ncia Jones de Almeida, Tiffany Lethabo King, Paul Kivel, Soniya Munshi, Ewuare Osayande, Amara H. P rez, Project South: Institute for the Elimination of Poverty and Genocide, Dylan Rodr guez, Paula X. Rojas, Ana Clarissa Rojas Durazo, Sisters in Action for Power, Andrea Smith, Eric Tang, Madonna Thunder Hawk, Ije Ude, Craig Willse.
INCITE! is a national activist organization of radical feminists of color advancing a movement to end all forms of violence against women, gender non-conforming, and trans people of color through direct action, critical dialogue, and grassroots organizing.