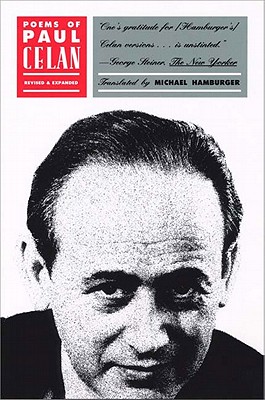 The classic translation, Poems of Paul Celan is revised and expanded, featuring new poems and an essay by the translator. It is the foremost English-language edition of the great poet.

The peerless translations of this haunted and haunting Holocaust poet, including ten new poems and an illuminating essay by the translator. Paul Celan is one the twentieth century's most essential poets, and twenty-two years after its publication, Poems of Paul Celan continues to be the single truest access for English-speakers to this poet's work. This new edition adds ten more poems and a significant essay, "On Translating Celan" by Michael Hamburger.

Paul Celan was a poet and translator born in the East European province of Bukovina. Soon after his parents, German-speaking Jews, had perished at the hands of the Nazis, Celan wrote the poem "Todesfuge" ("Deathfugue"), which depicted life in a German concentration camp.

Michael Hamburger (1924-2007) wrote many collections of poetry and criticism. Other notable translations include Baudelaire's Twenty Prose Poems. He received the European Translation Prize for Poems of Paul Celan.