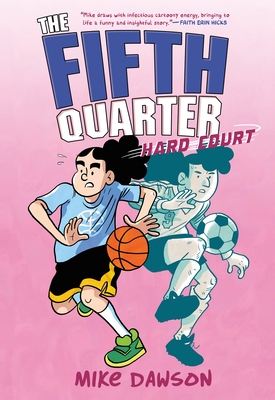 Grab a seat, and get ready to cheer Lori on once again, as she works through the growing pains of middle-school and faces her fears—on the court and in life.

Sixth grade is here! Just when Lori starts to get comfortable, things change again. Lori’s friends have found new interests. Her dad goes back to work for the first time since she was born. And when her mom decides to start coaching in the new after-school basketball league, Lori’s home life collides with her passion. To make matters worse, all her friends are playing for the opposing team. Lori feels frustrated and alone, like she might be falling behind in her game.

Mike Dawson is the author of several graphic novels and comics collections, including Freddie & Me: A Coming of Age (Bohemian) Rhapsody and Ace Face: The Mod with the Metal Arms. His work has appeared at The Nib, Slate, and The New Yorker, and has been nominated for multiple Eisner and Ignatz Awards, as well as the Slate Cartoonists Studio Prize. He lives at the Jersey Shore with his wife and children.