A Song for the Unsung: Bayard Rustin, the Man Behind the 1963 March on Washington (Hardcover) 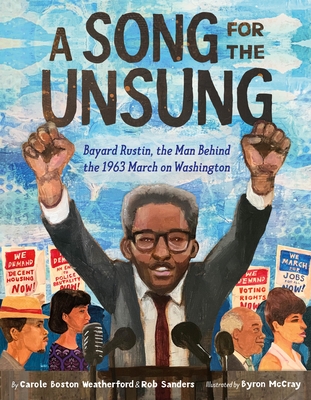 A Song for the Unsung: Bayard Rustin, the Man Behind the 1963 March on Washington (Hardcover)

A singular, richly illustrated picture book biography of Bayard Rustin, the gay Black man behind the March on Washington of 1963, by the acclaimed authors of Unspeakable: the Tulsa Race Massacre and Pride: The Story of Harvey Milk and the Rainbow Flag.

On August 28, 1963, a quarter of a million activists and demonstrators from every corner of the United States convened for the March on Washington for Jobs and Freedom. It was there and then that they raised their voices in unison to call for racial and economic justice for all Black Americans, to call out inequities, and ultimately to advance the Civil Rights Movement.

Every movement has its unsung heroes: individuals who work in the background without praise or accolades, who toil and struggle without notice. One of those unsung heroes was at the center of some of the most important decisions and events of the Civil Rights Movement.

That hero was a quiet man, a gay African American man. He was Bayard Rustin.

Carole Boston Weatherford and Rob Sanders's A Song for the Unsung, featuring illustrations from artist Byron McCray, is an inspiring story that answers one of our nation’s greatest calls to action by honoring one of the men who made it happen.

"A splendid tribute to a true hero of the civil rights movement." –Booklist, starred review

Rob Sanders is an acclaimed writer who teaches, and a teacher who writes. He is the author of Cowboy Christmas, Crystal Kite-winner Outer Space Bedtime Race, Ruby Rose - Off to School She Goes, Ruby Rose - Big Bravos, Rodzilla, Pride: The Story of Harvey Milk and the Rainbow Flag, and Peaceful Fights for Equal Rights. Rob lives in Florida where he teaches elementary school.

"A rare tribute to a heroic figure of the civil rights movement . . . McCray captures both a sense of the time’s widespread turmoil and of the march’s grand “mosaic of Americans” in collages that incorporate acrylics, scraps of newspaper, music, and decorated papers . . . Effectively raises the profile of an African American crusader who was stigmatized for more than his race alone." —Kirkus Reviews

"McCray’s gorgeous collage-and-acrylic illustrations make the book truly memorable, with newsprint and sheet music (often from the gospel and protest songs referenced on each page) adding motion to the rich, saturated hues." – Bulletin of the Center for Children's Books

"A splendid tribute to a true hero of the civil rights movement." –Booklist, starred review