The Vanderbeekers to the Rescue (Hardcover) 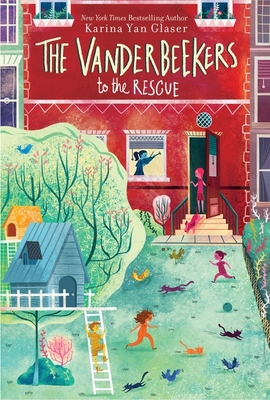 The Vanderbeekers to the Rescue (Hardcover)

This is book number 3 in the The Vanderbeekers series.

Harlem’s favorite family returns in the third installment in the Vanderbeerkers series! In To the Rescue, the Vanderbeeker kids find themselves racing to save their mother’s baking business from city closure.

For the Vanderbeeker kids of Harlem’s 141st Street, spring break couldn’t be off to a better start. Isa’s back from band camp, Oliver’s building his first-ever treehouse in the backyard of the brownstone, and Laney, Jess, and Hyacinth are excited to help their mother when she gets the once in a lifetime chance to star in a cooking magazine.

But the Vanderbeekers’ plans go off the rails when an unexpected visit from city officials puts their mother’s bakery in jeopardy. Now they’ll have to band together to save the day before they’re out of business.

The New York Times bestselling Vanderbeekers series is perfect for fans of the Penderwicks. As Booklist commented in a starred review: “Few families in children’s literature are as engaging or amusing as the Vanderbeekers, even in times of turmoil.”

Karina Glaser is the New York Times best-selling author of The Vanderbeekers series and A Duet for Home. A former teacher as well as employee of New York City's largest provider of transitional housing for the homeless, Karina is now a contributing editor at Book Riot. Karina lives in Harlem, New York City, with her husband, two children, and an assortment of rescue animals. One of her proudest achievements is raising two kids who can’t go anywhere without a book. Visit her at karinaglaser.com

"THE VANDERBEEKERS TO THE RESCUE is almost a case study in why these kinds of series are so captivating for young readers: Above all, while the happy ending might be a foregone conclusion, there is great satisfaction in seeing how their favorite characters untangle the knot this time.” — The New York Times Book Review

"Glaser ticks all the boxes of a classic middle-grade ensemble piece....funny, with character-grounded quirkiness, just enough slapstick, and no winking over kids’ heads....The whole thing is a little retro, very welcoming to the reader, and sweet to the core." — Horn Book Magazine

"Glaser manages the large cast of characters with ease.... A satisfying addition to the Vanderbeeker series." — Booklist