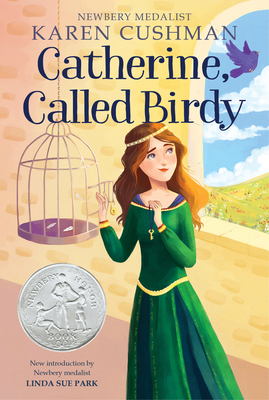 Read the book behind Lena Dunham’s acclaimed new movie! This historical fiction classic, told in the form of a diary, has drawn in generations of readers and is a Newbery Honor Book.

Catherine feels trapped. Her father is determined to marry her off to a rich man—any rich man, no matter how awful.

But by wit, trickery, and luck, Catherine manages to send several would-be husbands packing. Then a shaggy-bearded suitor from the north comes to call—by far the oldest, ugliest, most revolting suitor of them all. Unfortunately, he is also the richest.

Can a sharp-tongued, high-spirited, clever young maiden with a mind of her own actually lose the battle against an ill-mannered, piglike lord and an unimaginative, greedy toad of a father? Deus! Not if Catherine has anything to say about it!

Catherine, a spirited and inquisitive young woman, narrates in diary form the story of her fourteenth year—the year 1290.

In an appreciation in the New York Times, illustrator Vera Brosgol spoke for many fans of this beloved book: "I fell hard for Karen Cushman's Catherine, Called Birdy the second I opened it. More than any other heroine I'd read, this one sounded like me. For Catherine, and for me, there is no easy solution to the cages life makes for you. Sometimes the power is in deciding to be yourself in whatever cage you're in."

Karen Cushman's acclaimed historical novels include Catherine, Called Birdy, a Newbery Honor winner, and The Midwife's Apprentice, which received the Newbery Medal. She lives on Vashon Island in Washington State. Visit her online at karencushman.com and on Twitter @cushmanbooks.

"This unusual book provides an insider’s look at the life of Birdy, 14, the daughter of a minor English nobleman. The year is 1290 and the vehicle for storytelling is the girl’s witty, irreverent diary. . . . Superb historical fiction."
— School Library Journal (starred review)

"The period has rarely been presented for young people with such authenticity; the exotic details will intrigue readers while they relate more closely to Birdy’s yen for independence and her sensibilities toward the downtrodden. Her tenacity and ebullient naiveté are extraordinary; at once comic and thought-provoking, this first novel is a delight." — Kirkus Reviews (starred review)

"Birdy's journal, begun as an assignment, first wells up in the reluctant and aggressive prose of hated homework, and then eases into the lighthearted flow of descriptive adventures and true confessions; the narrative device reveals Birdy's passage from rebellious child to responsible adult. This first novel introduces an admirable heroine and pungently evokes a largely unfamiliar setting." — Publishers Weekly

"The lesson isn’t that love will save us. It’s to find a way to make your voice heard among all of the forces that want to shut it down. Catherine never gives up or loses her spirit. She still fights for what she believes in—women’s rights, herself, living the life she wants.” — Bustle