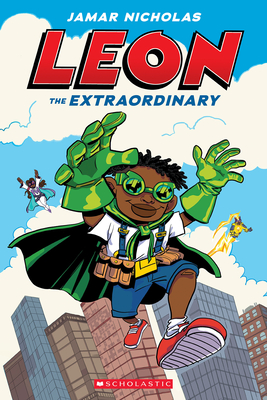 
Available to Ship from Warehouse - usually ships in 6 - 10 days.
Leon is an ordinary kid who becomes extraordinary when he fights a supervillain to save his school!

In the city where Leon lives, superheroes -- and supervillains -- are commonplace. So how does an ordinary kid like Leon, who has no superpowers himself, become the superhero he wants to be? When all his classmates suddenly become obsessed with a new phone app that turns them into zombies, Leon gets his chance to prove that using his brain and following his heart can save the day.

Equal parts New Kid and The Incredibles, the first graphic novel in this action-packed, heartfelt, and joyously funny series by Jamar Nicholas reminds readers that when it comes to being a hero, you just need to believe in yourself.

Born and raised in Philadelphia, Jamar Nicholas is an award-winning artist and educator who has dedicated his career to helping young people realize the power of cartooning. Jamar aims to promote anti-bullying, healing, and kindness in his work. He enjoys the 1980s, podcasting, video games, and spending time with his family and pets.

"This is a silly and fun-filled story with a heartwarming throughline about not needing special abilities to have an impact on one's community... A solid, action-filled comedy with a crucial message." -- Kirkus Reviews

"Jamar Nicholas delivers an engaging story about finding your own power... an uplifting read." -- Book Riot

"It's a refreshing change of pace to have a kid hero who's Black at the center of the story. Supersize panels with bold coloring truly make the stylized character designs pop and the action sequences come to life with plenty of classic superhero action. The various body types and skin tones represented in the artwork underscore the narrative that anyone can be a hero." -- Booklist

"Nicholas crafts a heartfelt story highlighting the power of doing the right thing and the strength of mothers... The range of diverse characters and relatable situations, such as bullying, jealousy, and personal growth, will provide readers with recognizable characters and feelings... Belonging on library shelves, this book will leave readers wanting more from Leon and his crew." -- School Library Journal

"This is exactly the sort of broadly appealing and gripping nonfiction graphic novel that librarians need to be adding to their shelves." -- Publishers Weekly

"Jamar Nicholas is a master of his craft -- his drawings are full of life and truly stunning." -- Bryan Lee O'Malley, creator of Scott Pilgrim vs. The World