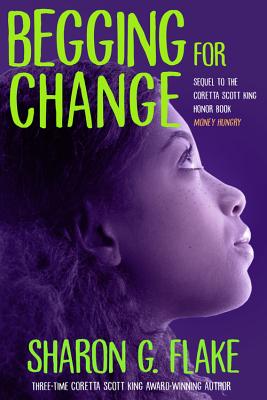 
Available to Ship - Usually ships in 2 - 5 days.
Is there greed in Raspberry Hill's genes? In this sequel to Coretta Scott King Honor Book Money Hungry, once-homeless Raspberry Hill vows never to end up on the streets again. It's been a year since Raspberry's mother threw her hard-earned money out the window like trash, so to Raspberry money equals security and balance. And she's determined to do anything to achieve it. But when a troubled neighborhood teenager attacks her mother and Raspberry's drug-addicted father returns, Raspberry becomes desperate for her life to change and ends up doing the unthinkable, potentially ruining her friendships and losing her self-respect along the way. Will Raspberry accept that nothing good comes of bad money? Or is she destined to follow in her father's footsteps?
Sharon G. Flake has an international reputation as a top author for children and young adults. Her breakout novel, The Skin I'm In, established her as a must-read author among middle and high school students, parents, and educators. She has spoken to more than two hundred thousand young people, and hugged nearly as many. Flake has penned nine novels, numerous short stories, plays, and a picture book entitled You Are Not a Cat.

Her work has received numerous awards, such as the Coretta Scott King Honor award and the YWCA Racial Justice Award, and her books have been named to many prestigious lists, including Kirkus Review's Top Ten Books of the Year, Best Books for Young Adults by the American Library Association, Top Ten Books for the Teen Age by the New York Public Library, Top Twenty Recommended Books to Read by the Texas Library Association, 100 Books Every Teenage Girl Should Read, and Booklist Editor's Choice, among others. She lives in Pittsburgh, Pennsylvania. For more information, go to sharonflake.com, or follow her on Twitter @sharonflake.
PRAISE FOR BEGGING FOR CHANGE:
"Flake's strength . . . lies in developing genuine, believable adults and children who continue to grow and change through their relationships with each other."
—BCCB, starred review