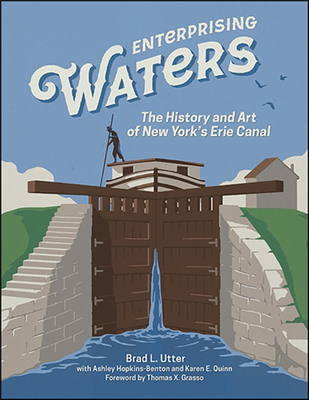 
Available to Ship from Warehouse - Ships in 3 - 6 days.
One of the largest public works projects in American history, the Erie Canal inspired a nationwide transportation revolution and directed the course of New York and American history. When completed in 1825, the engineering marvel unlocked the Western interior for trade and settlement, boomtowns sprang up along the canal's path, and New York City grew to be the nation's most powerful center of international trade. Millions of people poured into New York (and some through it) to take advantage of the tremendous opportunities provided by the canal, influencing settlement and the social, political, and commercial landscapes of America. Produced in honor of the bicentennial of the beginning of construction of the canal, Enterprising Waters--a companion catalog to the New York State Museum's exhibition of the same name--includes reproductions of objects and images from the collections of more than thirty-five different institutions and individual lenders. It also contains reproductions of fifty-nine works of art used in the companion exhibition "Art of the Erie Canal." Themes of politics, engineering, commerce, life on the canal, and more are paired with full color images of artifacts, documents, and images to bring this unique American story to life, from its inception to today.
At the New York State Museum, Brad L. Utter, Ashley Hopkins-Benton, and Karen E. Quinn are all Senior Historians and Curators. Hopkins-Benton is the coauthor (with Jennifer A. Lemak) of Votes for Women: Celebrating New York's Suffrage Centennial, also published by SUNY Press, and Quinn is a contributor to Mount Washington: The Crown of New England, by P. Andrew Spahr.