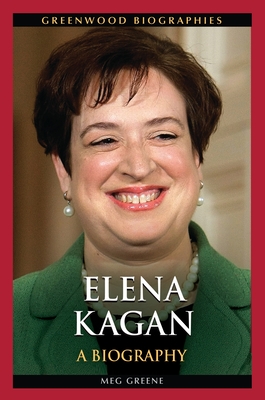 Elena Kagan can be considered a wild card in terms of how she will vote and affect Supreme Court decisions. While largely considered a liberal, her lack of a judicial track record and previous work as Solicitor General lend an air of uncertainty as to how she will react to upcoming cases that have proven highly divisive and controversial.

This full-length biography sheds light on Elena Kagan's life, covering her college years at Princeton and her experience in law school as well as her legal career, which eventually led her to a seat on the U.S. Supreme Court. Appropriate for high school, college, and adult readers, the book not only documents Justice Kagan's life, achievements, and the possibilities for the future, but also how Kagan is an inspiring role model who demonstrated independence, determination, and high achievement throughout her career.

Meg Greene is a historian and author of numerous Greenwood biographies of significant individuals such as Sonia Sotomayor and Henry Louis Gates Jr.