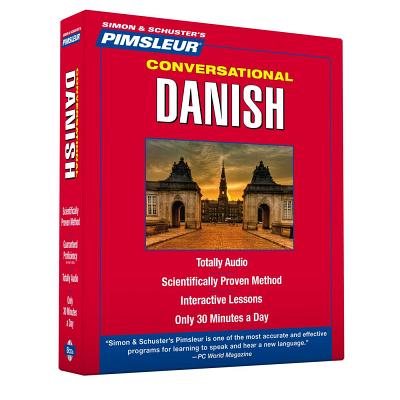 
Available to Ship from Warehouse - Ships in 3 - 6 days.
Pimsleur® equals success. Just one 30-minute lesson a day gets you speaking and understanding like no other program.

This course includes Lessons 1-16 from the Danish Level 1 program - 8 hours of audio-only effective language learning with real-life spoken practice sessions. Each lesson provides 30 minutes of spoken language practice, with an introductory conversation, and new vocabulary and structures. Detailed instructions enable you to understand and participate in the conversation. Practice for vocabulary introduced in previous lessons is included in each lesson. Topics include: greetings, numbers, meals, shopping, telling time, scheduling activities, and asking and giving directions. The emphasis is on pronunciation and comprehension, and on learning to speak Danish.

Reading Lessons begin at the end of Lesson 11 to provide you with an introduction to reading Danish. The Reading Booklet to be used with the audio Reading Lessons must be downloaded.

The Danish Language
Danish, a North Germanic language based on Old Norse, is spoken by some 6 million people, primarily in Denmark, although there are some speakers in Norway, Sweden, the Faroese Islands, and Greenland. Within the country of Denmark, there are many different dialects spoken. Generally, the newscast or Standard Danish (also referred to as rigsdansk), which is based on the dialects spoken in and around Copenhagen, is considered the most desirable dialect. This course adheres as closely as possible to Standard Danish. Because of the large number of similarities between Danish, Norwegian, and Swedish, knowledge of any one of these languages makes it possible to understand the others. This is true for both spoken and written forms.
Dr. Paul Pimsleur devoted his life to language teaching and testing and was one of the world’s leading experts in applied linguistics. After years of experience and research, Dr. Pimsleur developed The Pimsleur Method based on two key principles:  the Principle of Anticipation and a scientific principle of memory training that he called “Graduated Interval Recall.”  This Method has been applied to the many levels and languages of the Pimsleur Programs.