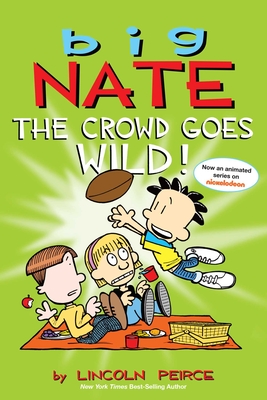 This is book number 9 in the Big Nate series.

Nate Wright is one of a kind. Whether he's fast-talking his way out of trouble or unleashing the contents of his locker on unsuspecting classmates, Nate does it with gusto. And every time he swings into action . . . THE CROWD GOES WILD!

11-year-old Nate Wright steps up to the plate! In this collection of comics from The New York Times best-selling series, everyone’s favorite sixth-grade prankster takes a swing at entrepreneurship with a “Free Cold Water” stand, campaigns against Social Studies as Class President, and breaks out of a batting slump. While Nate’s big ideas aren’t always grand slams, he and his friends can turn any day into a win.

Based on cartoonist Lincoln Peirce’s hilarious childhood memories and teaching experiences, Big Nate is a home run for readers everywhere.
Lincoln Peirce has been drawing the Big Nate comic strip for more than 20 years. Born in Ames, Iowa, Peirce grew up in Durham, New Hampshire. As a kid, he began creating his own strips in the sixth grade. Peirce taught high school in New York City and has created several animated pilots for Cartoon Network and Nickelodeon. He lives in Portland, Maine, with his family.
“…familiar territory is what makes Big Nate so much fun… “In addition to the graphic storytelling, Nate’s cartoons interspersed among Peirce’s panels could provide teachers and librarians with great opportunities to incorporate this series into programs or lessons on cartooning and writing.” (Snow Wildsmith, Booklist)

“…if you’re looking for a new series to introduce your kids to this upcoming holiday season, chances are they’ll really like these collections.” (Rich Johnston, Bleeding Cool)

“Big Nate is super funny. I love these books.” (Appeal-Democrat)