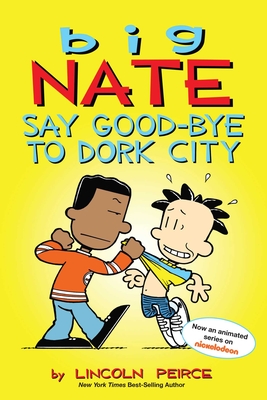 This is book number 12 in the Big Nate series.

Can Nate Wright get any cooler? Not according to Nate himself. He’s already P.S. 38’s rockin’est drummer, finest poet (check out his haiku about brazil nuts), and deepest thinker—in his own mind. But does Nate have what it takes to hang with Marcus, leader of the school’s most notorious posse? Or will he decide that being cool isn’t all it’s cracked up to be? Read Say Good-bye to Dork City… and say hello to lots of laughs!
Lincoln Peirce has been drawing the Big Nate comic strip for more than 20 years. Born in Ames, Iowa, Peirce grew up in Durham, New Hampshire. As a kid, he began creating his own strips in the sixth grade. Peirce taught high school in New York City and has created several animated pilots for Cartoon Network and Nickelodeon. He lives in Portland, Maine, with his family.