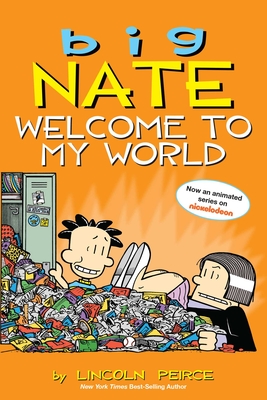 This is book number 13 in the Big Nate series.

Join Big Nate and his classmates Gina, Artur, Francis, Jenny, and Teddy, as they navigate the halls of P.S. 38. One thing's for sure: Nate is definitely not the teacher's pet!

Nate Wright’s life is just like his locker—it’s full of surprises. The monstrous Mrs. Godfrey springs a pop quiz on Nate AND his grandparents. His horoscope predicts bad news for Nate’s soccer career. And worst of all, he’s forced to cut back on his beloved Cheez Doodles. It’s enough to drive any kid crazy. Luckily, Nate’s not just any kid. He’s the ultimate sixth-grade survivor. When everything’s falling apart, he finds a way to hold it together … but nobody said it would be easy. Welcome to the world of Big Nate!
Lincoln Peirce has been drawing the Big Nate comic strip for more than 20 years. Born in Ames, Iowa, Peirce grew up in Durham, New Hampshire. As a kid, he began creating his own strips in the sixth grade. Peirce taught high school in New York City and has created several animated pilots for Cartoon Network and Nickelodeon. He lives in Portland, Maine, with his family.