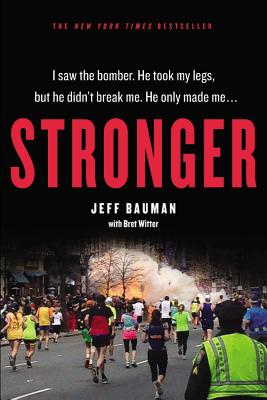 When Jeff Bauman woke up on Tuesday, April 16th, 2013 in the Boston Medical Center, groggy from a series of lifesaving surgeries and missing his legs, the first thing he did was try to speak. When he realized he couldn't, he asked for a pad and paper and wrote down seven words: "Saw the guy. Looked right at me," setting off one of the biggest manhunts in the country's history.

Just thirty hours before, Jeff had been at the finish line of the 2013 Boston Marathon cheering on his girlfriend, Erin, when the first bomb went off at his feet. As he was rushed to the hospital, he realized he was severely injured and that he might die, but he didn't know that a photograph of him in a wheelchair was circulating throughout the world, making him the human face of the Boston Marathon bombing victims, or that what he'd seen would give the Boston police their most important breakthrough.

In Stronger, Jeff describes the chaos and terror of the bombing itself and the ongoing FBI investigation in which he was a key witness. He takes us inside his grueling rehabilitation, and discusses his attempt to reconcile the world's admiration with his own guilt and frustration. . Brave, compassionate, and emotionally compelling, Jeff Bauman's story is not just his, but ours as well.
Jeff Bauman was an ordinary twenty-seven year old when a bomb took his legs at the Boston Marathon. A photograph taken at the scene and his vital role in identifying the bomber made him the face of the tragedy, but his determination, humor, and positive attitude has since inspired millions.

Bret Witter has co-authored eight New York Times bestsellers. His books have been translated into over thirty languages and sold over two million copies worldwide.

"STRONGER is not merely a triumph-over-adversity story, but a love story....the book exudes a sense of transparency and honesty."—Boston Globe

"Bauman's moving story illustrates what he believes: 'We are better than cowards with bombs...We are stronger.'"—People Magazine

"A moving demonstration of how strength of mind and character helped one man stand tall despite the loss of his legs."—Kirkus Reviews