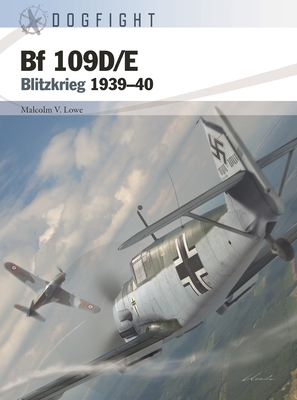 Using first-hand accounts and brand-new artwork, this book brings to life the realities of flying the Bf 109 in combat during the very first battles of World War II.

The Bf 109 was one of the principal fighter aircraft types in the Luftwaffe's inventory during the opening months of World War II and it was central to many of Germany's early victories, before coming up against the unbeatable RAF during the Battle of Britain.

This book presents first-hand experiences of the pilots who flew the Bf 109E, the aircraft which first featured a Daimler-Benz DB 601 powerplant, and which was in the front line in the skies over Poland, the Low Countries and France, and the older Bf 109D, still in use in the Polish campaign.

The early variants of the Messerschmitt fighter, the Bf 109E-1, Bf 109E-2 and Bf 109E-3, swept all before them during the opening wartime campaigns, their successes only fading at the Battle of France, when the Bf 109's seasoned pilots encountered modern and well-flown RAF and Armée de l'Air fighters.

In a rigorous and engaging new analysis, Luftwaffe aviation expert Malcolm V. Lowe examines and assesses the Bf 109 as a fighting machine from the perspective of the Luftwaffe at the forefront of the German blitzkrieg. Contemporary photographs and specially commissioned artwork, including a dramatic battlescene, armament views, technical diagrams and ribbon diagrams illustrating step-by-step each battle tactic of the main dogfights explored in the book, bring the experiences of the Bf 109 pilots vividly to life.

Malcolm V. Lowe is a writer and historian specialised on Luftwaffe, RAF and USAAF air operations between 1939–45 over northwest Europe. He has written articles for magazines including Aeroplane Monthly, Aviation News and FlyPast. Malcolm's books have been critically acclaimed for their research and published in German, French, Czech, Chinese and Arabic.

The illustrators for this volume are Gareth Hector (cover and battlescene), Jim Laurier (armament views) and Tim Brown (technical and ribbon diagrams).

"You will not find any books out there with this high level of detail supported by superb artwork at such an affordable price. I highly recommend this book to any Luftwaffe historians, Bf 109 enthusiasts, or anyone wanting to learn more about early Luftwaffe fighter capabilities, design, and employment in the first year of the war." - Todd Shughart, Aviation News Magazine

"The swooping illustrations of individual actions add drama, being accompanied by a step by step explanation of the action. All this makes for a fascinating and original look at a well-documented subject material" - Gary Hatcher, Scale Aircraft Modelling