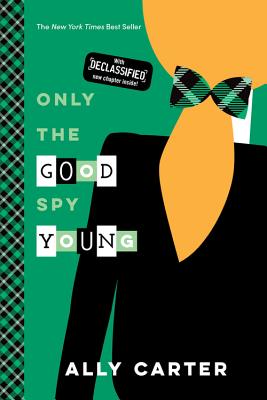 This is book number 4 in the Gallagher Girls series.

Don't miss a moment of the beloved, bestselling series where spies-in-training navigate double crosses, secret missions, friendship, and first love--now with a bonus epilogue!
When Cammie Morgan enrolled at the Gallagher Academy, she knew she was preparing for the dangerous life of a spy. What she didn't know was that the serious, real-life danger would start during her junior year of high school. But that's exactly what happened two months ago when Cammie faced off against an ancient terrorist organization dead set on kidnapping her.
Now the danger follows her everywhere, and even Cammie "The Chameleon" can't hide. When a terrifying encounter in London reveals that one of her most-trusted allies is actually a rogue double-agent, Cammie no longer knows if she can trust her classmates, her teachers-or even her own heart.

The Gallagher Girls must hack, spy, steal, and lie their way to the truth as they discover that the key to Cammie's future may lie deep in the past.

Ally Carter (www.allycarter.com) is the New York Times best-selling author of the six books in the Gallagher Girls series: I'd Tell You I Love You, But Then I'd Have to Kill YouCross My Heart and Hope to SpyDon't Judge a Girl by her CoverOnly the Good Spy YoungOut of Sight, Out of Time and United We Spy as well as Heist Society, Uncommon Criminals, and Perfect Scoundrels. Ally lives in Oklahoma where she is hard at work on her next novel.

PRAISE FOR I'D TELL YOU I LOVE YOU, BUT THEN I'D HAVE TO KILL YOU

"Readers will eagerly anticipate the next installment."—Publishers Weekly

PRAISE FOR CROSS MY HEART AND HOPE TO SPY

"It is difficult to imagine what teen girl would not want to read-and reread-this second book in a butt-kicking series."—VOYA

PRAISE FOR DON'T JUDGE A GIRL BY HER COVER

* "These girls remain the most awesome, kick-butt teens ever, but now readers are also getting a glimpse at what makes them vulnerable...This reviewer loves the series, enjoyed this book, and is struggling to wait for the next one."—VOYA, starred review

PRAISE FOR OUT OF SIGHT, OUT OF TIME

* "This episode is nearly three hundred pages of perfection, and the only regret fans will have when they are done is being one step closer to the final installment of this outstanding series."—VOYA, starred review

PRAISE FOR UNITED WE SPY