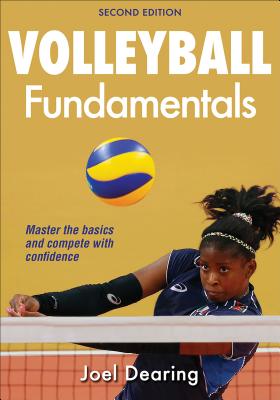 Learning to play volleyball has never been more effective—or more fun—than with Volleyball Fundamentals, Second Edition. Parents, coaches, and instructors of volleyball skill courses will immediately benefit from the solid foundational information and practical tips on how to teach every aspect of the sport. Players will enjoy using this resource because they will learn by doing—spending less time reading and more time engaged in playing the game.

Volleyball Fundamentals begins by teaching the basics that get players ready to take the court. The book covers positioning and the importance of reading the opposing players, communicating with teammates, and preparing for movement on the court. The guidance on formations and rotations will help students get an immediate sense of where they belong on the court. Clear instructions, accompanied by illustrations, for drills help players master specific skills such as serving, receiving a serve, setting, attacking, blocking, and digging. Each skill is introduced through a simple four-step sequence:

• You Can Do It: The skill is introduced with sequential instructions and accompanying photographs.

• More to Choose and Use: Variations and extensions of the primary skill are covered.

• Take It to the Court: Readers learn how to apply the skill in game play.

• Give It a Go: These sections provide direct experiences—such as drills, small-sided games, and six-versus-six gamelike activities—for the reader to use to gauge, develop, and hone the skill.

Throughout the book, teaching cues offer advice for avoiding common mistakes. New to this edition is a chapter on how to effectively use the libero position (defensive specialist) in game play. Sections on offensive and defensive tactics, scoring systems, rules, and modified games have also been updated to make the game as easy for you to teach as it is for your students to learn.

As part of the Sports Fundamentals Series, Volleyball Fundamentals will help you teach the basic skills and tactics of the game so that your players can compete on the court in no time at all.

Joel B. Dearing retired after the 2010 season from a 30-year and 40-season (combining women’s and men’s teams) collegiate coaching career with an overall 899-384 record. Dearing was the first coach for the women’s and men’s programs at Roger Williams University before taking over both programs at Springfield College in Massachusetts in 1989. He finished with a 728-310 career record and .701 winning percentage for his women’s teams, putting him in the top 10 in NCAA Division III history. His 1996 Springfield College men’s team was undefeated against Division III competition and finished the season ranked first in the country. He remains on the Springfield College faculty, teaching full time in the athletic administration graduate program.

Dearing is a member of the American Volleyball Coaches Association (AVCA) and a member of USA Volleyball’s cadre of coaches. He is a five-time recipient of the AVCA Region Coach of the Year Award (1993, 1994, 1996, 2003, and 2008), was honored by the International Volleyball Hall of Fame with the Mintonette Medallion of Merit Award in 2013, and was elected into the Springfield College Athletic Hall of Fame in 2015. He is also the author of The Untold Story of William G. Morgan—Inventor of Volleyball.

Dearing Leadership LLC was established in 2018 and includes Dearing Volleyball School (started in 1984), where he runs his summer camps and coaching clinics. Dearing also conducts leadership training seminars and is available for motivational and public speaking engagements.

END_OF_DOCUMENT_TOKEN_TO_BE_REPLACED

This feature require that you enable JavaScript in your browser.
END_OF_DOCUMENT_TOKEN_TO_BE_REPLACED

This feature require that you enable JavaScript in your browser.
END_OF_DOCUMENT_TOKEN_TO_BE_REPLACED

This feature require that you enable JavaScript in your browser.
END_OF_DOCUMENT_TOKEN_TO_BE_REPLACED