The Triumph of the Amateurs: The Rise, Ruin, and Banishment of Professional Rowing in the Gilded Age (Hardcover) 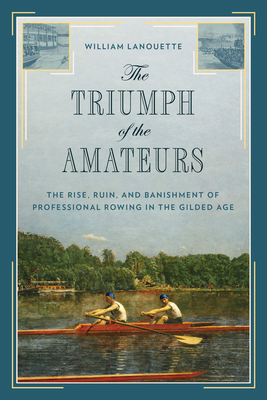 The Triumph of the Amateurs: The Rise, Ruin, and Banishment of Professional Rowing in the Gilded Age (Hardcover)


Out of Stock in store and warehouse. We don’t have a restock date.
The Triumph of the Amateurs is the story of the lost world or professional rowing in America, a sport that attracted crowds of thousands, widespread betting, and ultimately corruption that foretold its doom. It centers on the colorful careers of two New York City Irish boys, the Biglin brothers John and Barney, now long forgotten save for Thomas Eakins's portraits of them in their shell. If the bestseller The Boys in the Boat portrayed the good guys of the U.S.'s 1936 Olympic crew, the Biglins, along with their colleagues and successors, were the Bad Boys in the Boat. Rascals abounded on and off the water, where rowdy fans often outdid modern soccer thugs in violence, betting was rampant--as was fixing--and spectators in the tens of thousands came out to see it all. The Triumph of the Amateurs traces the sport from its rise in the years before the Civil War on through the Gilded Age to its scandalous demise and eventual transition into a purely amateur sport. In addition, Barney Biglin's later career as holder of sinecures offers a colorful glimpse into late 19th-century New York City political corruption. Illustrated with 40 black and white and color illustrations, including Thomas Eakins's famous paintings of the Biglin brothers rowing on the Schuylkill River in Philadelphia in 1872.
William Lanouette was a journalist on the staffs of Newsweek, The National Observer, and National Journal and was Washington Correspondent for The Bulletin of the Atomic Scientists. His freelance writing has appeared in The Atlantic, Civilization, The New York Herald Tribune, Scientific American, The Washington Post, and The Wilson Quarterly. He has reported on rowing for Newsweek, Sports Illustrated, The National Observer, and Smithsonian, as well as for the NAAO (now US Rowing) publications Rowing Guide and Rowing News. He first rowed at Fordham College and the New York Athletic Club, and continued the sport with the London School of Economics Boat Club (University of London), the Potomac Boat Club, and the San Diego Rowing Club. In a second career, he was a Senior Analyst for Energy and Science Issues at the US Government Accountability Office, the investigative agency for Congress. His first book, Genius in the Shadows: A Biography of Leo Szilard, the Man Behind the Bomb, was a New York Times Book Review Notable Book of the Year. He lives in San Diego.