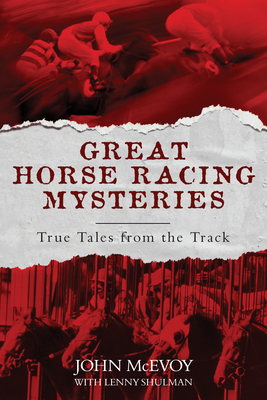 
Available to Ship from Warehouse - Ships in 3 - 6 days.
Great Horse Racing Mysteries digs beneath the surface of some of the sport's most intriguing cases, including the death by poisoning of the great Australian champion Phar Lap; the shooting of William Woodward by his wife Ann, owners of the great horse Nashua; the disqualification of 1960 Derby winner Dancer's Image (was he drugged?); the theft and disappearance in 1983 of Shergar, Europe's best-known racehorse and stallion; and the scandalous financial collapse of Calumet Farm after the death by euthanasia of Alydar, one of the world's most successful sires.John McEvoy researched several unsolved mysteries of the racing world- murder...suicide...arson...fraud-and recounts some of horse racing's strangest, most fascinating tales. In this updated edition, veteran turf writer Lenny Shulman adds to the intrigue by exploring the mysterious death of the troubled jockey Chris Antley, winner of the Kentucky Derby and Preakness aboard Charismatic, and Big Brown's stunning collapse in the Belmont after cruising to winsin the first two legs of the Triple Crown.
John McEvoy (1936-2019) was the former editor of the Daily Racing Form and author of the Jack Doyle horse racing mystery series as well as a profile of the legendary racehorse Round Table. Lenny Shulman is an Emmy Award-winning writer who has worked extensively in TV and film as well as for magazines and newspapers across the country. For 20 years he has served as features editor for BloodHorse magazine, the Thoroughbred industry's foremost trade publication. He is the author of Justify: 111 Days to Triple Crown Glory, Ride of Their Lives: The Triumphs and Turmoil of Today's Top Jockeys, and Head to Head: Conversations with a Generation of Horse Racing Legends.