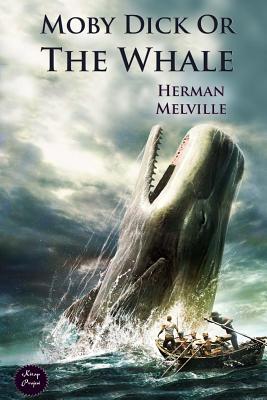 Moby-Dick; or, The Whale is a novel by Herman Melville, first published in 1851. It is considered to be one of the Great American Novels. The story tells the adventures of wandering sailor Ishmael, and his voyage on the whaleship Pequod, commanded by Captain Ahab. Ishmael soon learns that Ahab has one purpose on this voyage: to seek out Moby Dick, a ferocious, enigmatic white sperm whale. In a previous encounter, the whale destroyed Ahab's boat and bit off his leg, which now drives Ahab to take revenge. In Moby-Dick, Melville employs stylized language, symbolism, and metaphor to explore numerous complex themes. Through the journey of the main characters, the concepts of class and social status, good and evil, and the existence of God are all examined, as the main characters speculate upon their personal beliefs and their places in the universe. The narrator's reflections, along with his descriptions of a sailor's life aboard a whaling ship, are woven into the narrative along with Shakespearean literary devices, such as stage directions, extended soliloquies, and asides. The book portrays destructive obsession and monomania, as well as the assumption of anthropomorphism. Moby-Dick has been classified as American Romanticism. It was first published by Richard Bentley in London on October 18, 1851, in an expurgated three-volume edition titled The Whale, and weeks later as a single volume, by New York City publisher Harper and Brothers as Moby-Dick; or, The Whale on November 14, 1851. The book initially received mixed reviews, but is now considered part of the Western canon, and at the center of the canon of American novels. Moby-Dick begins with the line "Call me Ishmael." According to the American Book Review's rating in 2011, this is one of the most recognizable opening lines in Western literature.

Herman Melville (August 1, 1819 - September 28, 1891) was an American writer best known for the novel Moby-Dick. His first three books gained much contemporary attention (the first, Typee, became a bestseller), but after a fast-blooming literary success in the late 1840s, his popularity declined precipitously in the mid-1850s and never recovered during his lifetime. When he died in 1891, he was almost completely forgotten. It was not until the "Melville Revival" in the early 20th century that his work won recognition, especially Moby-Dick, which was hailed as one of the literary masterpieces of both American and world literature. In 1919, the unfinished manuscript for his novella Billy Budd was discovered by his first biographer, Raymond M. Weaver, who published a version in 1924 which was acclaimed by notable British critics as another masterpiece of Melville's. He was the first writer to have his works collected and published by the Library of America. Early life Herman Melville was born in New York City on August 1, 1819, the third of eight children of Allan and Maria Gansevoort Melville. Herman's younger brother, Thomas Melville, eventually became a governor of Sailors Snug Harbor. Part of a well-established and colorful Boston family, Melville's father, Allan, spent a good deal of time abroad as a commission merchant and an importer of French dry goods. After her husband Allan died, between 1832 and 1834, Maria added an "e" to the family surname-seemingly at the behest of her son Gansevoort. Early works and travel Melville's roving disposition and a desire to support himself led him to seek work as a surveyor on the Erie Canal. This effort failed, and his older brother helped him get a job as a "boy" (a green hand) on a New York ship bound for Liverpool. He made the voyage and returned on the same ship. Redburn: His First Voyage (1849) is partly based on his experiences of this journey. For three years after Albany Academy (1837 to 1840), Melville mostly taught school. From 1838 to 1847, he resided at what is now known as the Herman Melville House in Lansingburgh, New York. In late 1840, he decided to sign up for more work at sea.

END_OF_DOCUMENT_TOKEN_TO_BE_REPLACED

This feature require that you enable JavaScript in your browser.
END_OF_DOCUMENT_TOKEN_TO_BE_REPLACED

This feature require that you enable JavaScript in your browser.
END_OF_DOCUMENT_TOKEN_TO_BE_REPLACED

This feature require that you enable JavaScript in your browser.
END_OF_DOCUMENT_TOKEN_TO_BE_REPLACED