The Pioneers: The Heroic Story of the Settlers Who Brought the American Ideal West (CD-Audio) 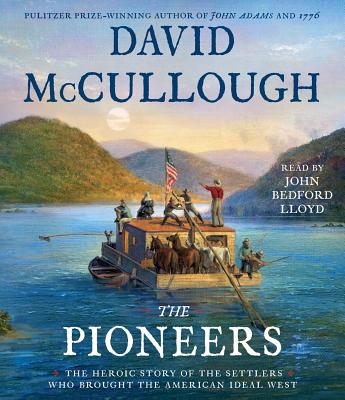 The Pioneers: The Heroic Story of the Settlers Who Brought the American Ideal West (CD-Audio)


This item may not be for sale. Contact store for more information.
The #1 New York Times bestseller by Pulitzer Prize–winning historian David McCullough rediscovers an important chapter in the American story that’s “as resonant today as ever” (The Wall Street Journal)—the settling of the Northwest Territory by courageous pioneers who overcame incredible hardships to build a community based on ideals that would define our country.

As part of the Treaty of Paris, in which Great Britain recognized the new United States of America, Britain ceded the land that comprised the immense Northwest Territory, a wilderness empire northwest of the Ohio River containing the future states of Ohio, Indiana, Illinois, Michigan, and Wisconsin. A Massachusetts minister named Manasseh Cutler was instrumental in opening this vast territory to veterans of the Revolutionary War and their families for settlement. Included in the Northwest Ordinance were three remarkable conditions: freedom of religion, free universal education, and most importantly, the prohibition of slavery. In 1788 the first band of pioneers set out from New England for the Northwest Territory under the leadership of Revolutionary War veteran General Rufus Putnam. They settled in what is now Marietta on the banks of the Ohio River.

McCullough tells the story through five major characters: Cutler and Putnam; Cutler’s son Ephraim; and two other men, one a carpenter turned architect, and the other a physician who became a prominent pioneer in American science. “With clarity and incisiveness, [McCullough] details the experience of a brave and broad-minded band of people who crossed raging rivers, chopped down forests, plowed miles of land, suffered incalculable hardships, and braved a lonely frontier to forge a new American ideal” (The Providence Journal).

Drawn in great part from a rare and all-but-unknown collection of diaries and letters by the key figures, The Pioneers is a uniquely American story of people whose ambition and courage led them to remarkable accomplishments. “A tale of uplift” (The New York Times Book Review), this is a quintessentially American story, written with David McCullough’s signature narrative energy.
David McCullough (1933–2022) twice received the Pulitzer Prize, for Truman and John Adams, and twice received the National Book Award, for The Path Between the Seas and Mornings on Horseback. His other acclaimed books include The Johnstown Flood, The Great Bridge, Brave Companions, 1776, The Greater Journey, The American Spirit, The Wright Brothers, and The Pioneers. He was the recipient of numerous honors and awards, including the Presidential Medal of Freedom, the nation’s highest civilian award. Visit DavidMcCullough.com.