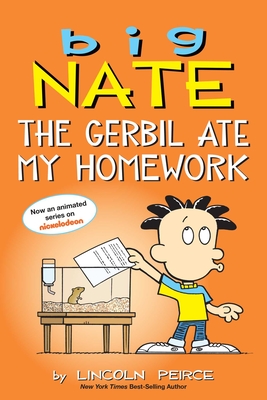 This is book number 23 in the Big Nate series.

Middle school is back in session and so is the New York Times bestselling series that's been brightening the funny papers for almost 30 years! Ready or not, some major laughs are due in Big Nate: The Gerbil Ate My Homework.

You’ve got to know where you stand to survive sixth grade, and Nate Wright’s found the perfect spot: right next to Sherman, the class gerbil. Can Nate’s furry friend bail him out of his latest homework jam with Mrs. Godfrey? Or will there be a paper trail leading straight to detention? Nate has no answers, but plenty of ideas—like directing a superhero movie starring the amazing Mega-Chad, inventing a new name for his pal Francis, and living up to his reputation as a P.S. 38 Prank Day legend.

Special final exam bonus question: Does Nate makes it to summer vacation? Find out in this collection of uproarious Big Nate comics! Middle school has never been funnier!

Lincoln Peirce has been drawing the Big Nate comic strip for more than 20 years. Born in Ames, Iowa, Peirce grew up in Durham, New Hampshire. As a kid, he began creating his own strips in the sixth grade. Peirce taught high school in New York City and has created several animated pilots for Cartoon Network and Nickelodeon. He lives in Portland, Maine, with his family.